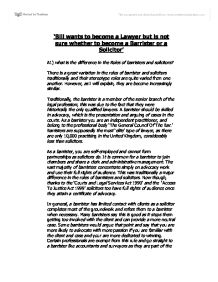 'Bill wants to become a Lawyer but is not sure whether to become a Barrister or a Solicitor' A1) what is the difference in the Roles of barristers and solicitors? There is a great variation in the roles of barrister and solicitors traditionally and their stereotype roles are quite varied from one another. However, as I will explain, they are become increasingly similar. Traditionally, the barrister is a member of the senior branch of the legal profession; this was due to the fact that they were historically the only qualified lawyers. A barrister should be skilled in advocacy, which is the presentation and arguing of cases in the courts. As a barrister you are an independent practitioner, and belong to the professional body 'The General Council Of The Bar.' Barristers are supposedly the most 'elite' type of lawyer, as there are only 10,000 practising in the United Kingdom, considerably less than solicitors. As a barrister, you are self-employed and cannot form partnerships as solicitors do. It is common for a barrister to join chambers and share a clerk and administrative management. The vast majority of barristers concentrate simply on advocacy work and use their full rights of audience. This was traditionally a major difference in the roles of barristers and solicitors. ...read more.

These are Lincolns Inn, Middle Temple, Inner Temple and Gray's Inn and are all in close proximity of the Royal Courts of Justice in London. Trainees must then study the one year Bar Vocational Course where they will learn the essential skills of a barrister; Advocacy, drafting documents and negotiation. A negative point about this is the funding in discretional from the Local Authorities and only some scholarships are available from the Bar Council, this leads to a bias towards middle class candidates. After this vocational course there is 'on the job' training in the form of a pupilage. This is often awkward, as it demands the need to study under a qualified barrister. There are very few placements available for these pupilages and they are often horrifically paid. They also can demand moving to a far-flung location. It has been known for you not to be paid for your pupilage and after these struggling 6 months, you may conduct your own cases and appear in court. You may only practise though if you gain a seat in a chamber. This is very tough as the number of applicants vastly outstrips the number of vacancies. Training to be a solicitor is a very difficult task also. You must first graduate with a degree of 2:1 in any subject. ...read more.

The Bars final argument is that the idea of specialisation would be lost and retraining would have to be undertaken by both sects. Two professions can do two jobs better than one. Solicitors of course argue against this and claim that costs would be slashed due to extensive competition in the market. This idea particularly appeals to the government as the soliciting body, The Law Society, insist that fusion would cut legal aid fees by �1million a year. This would also appeal to less wealthy clients as the monopoly held by barristers at the moment would be broken. They also argue that the legal system would be more efficient as everybody would know their jobs better and function as a team. Also the relationship with the client would be better as they are taken with the same lawyer from the interview to the courts, thus getting a better relationship. It would also prevent the last minute barrister changes leading to the defendants not necessarily having good defence. Another argument is that the scope for judicial selection would be enhanced, leading to an attempt to break the stereotype judge - 60's upper middle class man. Also the choice to specialise would still be there as legal students would still have the choice to specialise in a certain area of the law and learn the trade from paperwork to advocacy still. ...read more.