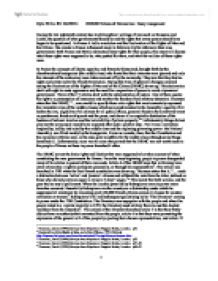 Both France and Britain advocated many rights for their people; this essay will discuss what those rights were supposed to be, who pushed for them, and what the realities of these rights were.

During the late eighteenth century due to philosophical writings of men such as Rousseau and Locke, the question of what governments should be and the rights that every person should have began to be questioned. In France it led to revolution and the Declaration of the Rights of Man and the Citizen. The events in France influenced many in Britain to try for reforms to their own government. Both France and Britain advocated many rights for their people; this essay will discuss what those rights were supposed to be, who pushed for them, and what the realities of these rights were. In France the concepts of liberty, equality, and fraternity blossomed, brought forth by the disenfranchised bourgeoisie (the middle class) who found that their interests were ignored and only the interests of the aristocracy were taken account of by the monarchy. They saw that they had no rights and events led to the French Revolution. During this time of upheaval changes occurred seeing the Declaration of the Rights of Man and of the Citizen (DRMC) drawn up. This declaration dealt with right to resist oppression and the need for a separation of power to avoid a tyrannical government. Three of the 17 articles dealt with the administration of justice. One of them asserts the right to a presumption of innocence and another the freedom from arbitrary detention. ...read more.

Liberty was curtailed during Napoleon's reign thus breaches of the DRMC under articles 4, 7, and 10 occurred as a result6. He used the military for his own purposes maintaining his power in contravention of article 12. However, Napoleon followed article 6 in employing people in his government based on talent regardless of background, a step forward in relation to equality7. On the other hand in his Napoleonic Code of laws, any gains made by women during the revolution were trampled8. Though the people of France had gained many rights through the Declaration of the Rights of Man and the Citizen, they were of no use unless those in power wished to follow them. Unlike France where a declaration put forth the rights of the people, in Britain, the people's rights were upheld by their 'unwritten constitution' which consisted of concepts such as the 'rule of law', the 'responsible government', and documents such as the Bill of Rights 16889, Magna Charta 121510, and Habeas Corpus Act 167911. The Rule of Law, limits the nature of governmental power to established laws applying those laws equally and impartially to all regardless of position or station. It protects citizens from arbitrary seizure of their goods or person and provides a framework of known procedures with which to conduct oneself. The Rule of Law has as its basis objective Natural Law, i.e. ...read more.

Firstly Habeas Corpus was suspended in 1794, allowing individuals to be imprisoned indefinitely on suspicion without requiring charges or trial. Then a series of 'Gagging Acts'14 were passed preventing speaking, writing, publishing anything 'treasonous' (basically calls for reform), and meetings of more than 50 people in order to discuss reforms15. This just sent reformers underground, and unrest, protests and riots occurred. In order to pacify the people in 1824 these Acts were repealed and the 1832 Reform Act16 was passed, this act changed the voting qualifications to an income �10 p.a., some larger towns gained MPs and smaller ones lost MPs. These were minimal reforms with the majority of the people still remaining without a political voice, thus any constitutional rights they had were only at the whim of the parliament. France in time of revolution and change guaranteed the peoples rights in written form. In Britain any rights the people had were conventions of an 'unwritten constitution'. In both Britain and France, these rights were only adhered to when it suited those in power. France's National Assembly was dominated mainly by the middle class, and the dictatorships formed through the revolution were led by men from the middle class. Whereas Britain's House of Commons was dominated by the upper classes. In both dissent was punished though the people were supposed to have rights to voice their views the reality was that they had them only at the whim of those in power. ...read more.