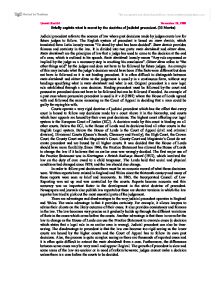 Briefly explain what is meant by the doctrine of judicial precedent.

Briefly explain what is meant by the doctrine of judicial precedent. (10 Marks) Judicial precedent refers to the sources of law where past decisions made by judges create law for future judges to follow. The English system of precedent is based on stare decisis, which translated from Latin loosely means "To stand by what has been decided". Stare decisis provides fairness and certainty in the law. It is divided into two parts: ratio decidendi and obiter dicta. Ratio decidendi are the principles of law that a judge has used to come to the decision at the end of a case, which is outlined in his speech. Ratio decidendi loosely means "Any rule expressed or implied by the judge as a necessary step in reaching his conclusion". Obiter dicta refers to "the other things said" by the judges and does not have to be followed by future judges. An example of this may include what the judge's decision would have been if the facts were different but does not have to followed as it is not binding precedent. ...read more.

The highest court affecting our legal system is the European Court of Justice (ECJ). A decision made by this court is binding on all other courts. Below the ECJ, is the House of Lords and its decisions bind all other courts in the English Legal system. Below the House of Lords is the Court of Appeal (civil and criminal division), Divisional Courts (Queen's Bench, Chancery and Family), the High Court, the Crown Court, the County Court and the Magistrate's Court. County Court and Magistrate's Court do not create precedent and are bound by all higher courts. It was decided that the House of Lords should have more flexibility. Since 1966, the Practice Statement has allowed the House of Lords to change the law if it believes that an earlier case was wrongly decided. The first major use of the Practice Statement was in Herrington v British Railways Board (1972), which involved the law on the duty of care owed to a child trespasser. ...read more.

The law becomes very precise as it gradually builds up through the different variations of facts in the cases which come before the courts. Another advantage is that there is room for the law to change as the House of Lords can use the Practice Statement to overrule cases (a decision which states that a legal rule in an earlier case is wrong). Judicial precedent can also be time-saving. The disadvantage to precedent is that the law can become too rigid seeing as the lower courts are bound by the higher courts and the Court of Appeal has to follow its own past decisions. Also, the process is quite complex seeing as there are thousands of reported cases and it is often quite difficult to extract the ratio decidendi from a case. Furthermore, the differences between some cases may be very small and appear illogical. The growth of precedent is slow and some areas of the law are unclear or in need of reform however, judges cannot make a decision unless there is a case before the courts to be decided. ?? ?? ?? ?? Uzmah Rashid November 10, 2008 ...read more.

This is a generally accurate answer, which at times contains some case authority and examples in support of the basic description. It is important to just answer the set question - not to include irrelevant material such as advantages and disadvantages.
Rating ***