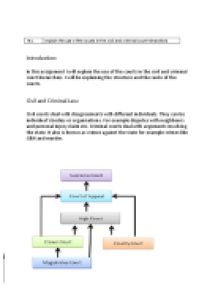 ﻿`P1 explain the use of the courts in the civil and criminal court hierarchies Introduction: In this assignment I will explain the use of the courts in the civil and criminal court hierarchies. I will be explaining the structure and the ranks of the courts. Civil and Criminal Law: Civil courts deal with disagreements with different individuals. They can be individual?s bodies or organisations. For example disputes with neighbours and personal injury claim etc. Criminal courts deal with arguments involving the state. It also is known as crimes against the state for example crimes like GBH and murder. Youth Court: A youth court is a type of magistrate?s court for students, for e.g. 10 ? 18 A youth court has 3 magistrates and a district judge. There isn?t a jury in a youth court. A parent and guardian must be with you at all times if you go to a youth court. Youth courts are different from adult courts through many ways. For example they are less formal and members of the public are not allowed in the court unless permission, another factor is that you are called by your first name. ...read more.

In a crown court there normally is a jury which decides if you?re guilty or not and also had a judge which decides which sentence you got and how long it is. It can give many sentences which range from community sentences and or prison sentences including life sentences. The crown court deals with around 3% of most criminal offences. Offences such as murder, r**e etc are covered in this court. The trial is performed by the jury. There are no limitations to fines and life sentences can be given. In this court they only hear first instance cases. They are bound by all the higher courts decisions. County Court (Civil): The county court covers one or more counties and deals with cases such as divorce, child custody, injury claims etc. They only hear first instance cases and are bound by all the higher court decisions. Complicated cases are held here such as family, as well as personal injury etc. This court covers these types of offences worldwide. High Court (Criminal/Civil): The high court deals with 3 divisions: * Family Division ? family issues like divorce, child custody etc. ...read more.