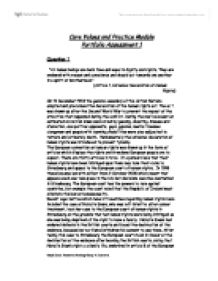 Care Values and Practice Module Portfolio Assessment 1 Question 1 "All human beings are born free and equal in dignity and rights. They are endowed with reason and conscience and should act towards one another in a spirit of brotherhood." (Article 1, Universal Declaration of Human Rights) On 10 December 1948 the general assembly of the United Nations adopted and proclaimed the declaration of the human rights act. The act was drawn up after the Second World War to prevent the repeat of the atrocities that happened during the conflict. During the nazi holocaust an estimated six million Jews were killed by gassing, shooting, disease and starvation, also political opponents, gays, gypsies, mental illnesses clergymen and people with learning disabilities were also subjected to torture and ultimately death. Fundamentally the universal declaration of human rights was introduced to prevent tyranny. The European convention on human rights was drawn up in the form of articles which displays the rights and freedoms European people are to expect. There are thirty articles in total. If a person feels that their human rights have been infringed upon them may take their claim to Strasbourg and appeal to the European court of human rights. In 1998 these became law with effect from 2 October 2000 which meant that appeals could also take place in the UK, but decisions could be overturned in Strasbourg. ...read more.

The fact that there is a high staff turnover is a worrying factor for a children's home and should have been investigated as to the reasons why or maybe a more rigid application process. According to the clients rights Tisha should have had privacy and she did not, her personal beliefs were not acknowledged. The client has "the right to have personal beliefs, preferences and choices acknowledged and supported including culture, religion and political beliefs ". Tisha also has the rights of freedom from exploitative and abusive practise; she was suffering from abuse from the other children. Based on these facts from the case study, her treatment was substandard she should have expected more from social services, although the care staff did have good intentions they clearly could not cope with the situation and have not intercepted the abuse she received from the other children. All of her rights have been ignored. Given her circumstances maybe if her being placed there for a short period, maybe a day or two would have been just acceptable but in the mean time social services should had worked harder to find more appropriate accommodation for her, to meet her needs. If I was the manager responsible for the residential care, I would insist on all the staff being trained on human rights and what each child should expect. ...read more.

The employer afgued that they would have treated a non- pregnant woman or a man the same and it was not the pregnancy but the unavailability to work which led to her dismissal. This was overturned and the courts decided that the dismissal of a pregnant woman on account of her pregnancy, for reasons connected with it was automatically sex discrimination without the need for comparison with a man or a non-pregnant woman and sick employee. This was ruled because pregnancy cannot be equated with sickness or unavailability for work owing to sickness. These are just a couple of examples of how the sex discrimination act and employment rights act have protected women in employment with regards to pregnancy. These acts seem to really protect women during pregnancy; they make it difficult for the employer to discriminate against pregnant women, given that it is the employer who must disprove the allegations made. This is extremely hard to do, especially if the employer is discriminating against the pregnant woman. This area was chosen because although women are discriminated against, regarding pay and employment status. It also happens during pregnancy, possible when a woman is at her most vulnerable, and much work is yet to be done there are steps taken to eliminate this oppression and in discussing rights in pregnancy is a good example of how times are changing. ...read more.