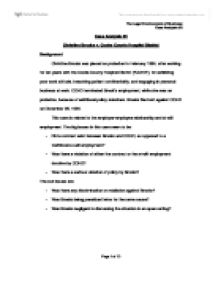 Case Analysis #3 Christine Brooks v. Cooke County Hospital District Background Christine Brooks was placed on probation in February 1994, after working for ten years with the Cooke County Hospital District ("CCHD"), for exhibiting poor work attitude, breaching patient confidentiality, and engaging in personal business at work. CCHD terminated Brook's employment, while she was on probation, because of additional policy violations. Brooks filed suit against CCHD on December 28, 1994. This case is related to the employer-employee relationship and at-will employment. The big issues in this case seem to be: - Did a contract exist between Brooks and CCHD, as opposed to a traditional at-will employment? - Was there a violation of either the contract or the at-will employment doctrine by CCHD? - Was there a serious violation of policy by Brooks? The sub issues are: - Was there any discrimination or retaliation against Brooks? - Was Brooks being penalized twice for the same cause? - Was Brooks negligent in discussing the situation in an open setting? Christine Brooks' case Christine Brooks had been employed with CCHD for almost ten years. In 1994 she was terminated while on probation. The following text attempts to analyze Brooks' position and the approach that she should take to make her case against CCHD. Brooks' case should focus on proving that her status with CCHD was not at-will and that CCHD broke a contract that they had. Given that the burden of proof was on Brooks', here is how she should analyze and start presenting her case: Given the sequence of events and the contents of section 18 of CCHD's personnel policy manual, it seems like Christine Brooks could claim a wrongful discharge against CCHD. Termination of an employee in violation of an exception to the at-will employment doctrine is wrongful discharge. The traditional at-will employment doctrine provides that either the employer or the employee may terminate the relationship at any time for any or for no reason without liability. ...read more.

Brooks can make the following arguments in this regard: The individuals involved in the conversation were all supervisors or members of management of CCHD. By discussing the issues with other employees, who were also bound by similar confidentiality, Brooks had not breached patient confidentiality. Brooks did not refer to her aunt or the aunt's roommate by their names. It is impractical to assume that any non-employee in the cafeteria would, first, comprehend the conversation and, second, understand who the aunt and her roommate were without hearing their names. Based on their experience of working in the health care industry, neither Albrighton nor Beathe nor Jones, thought that Brooks had breached any patient confidentiality. Brooks had visited her aunt, who was a patient at the hospital with a broken hip, on a weekend. During the visit Brooks observed that her aunt's morning care had not been given, she had not been given a bath, and she had not been fed. Also, her aunt's roommate was vomiting off the side of her bed. The primary reason for Brooks' conversation was her concern for the patients, not attacking CCHD personnel. Although the case does not provide sufficient details into effects of termination on Brooks, she could potentially bring a tort claim against CCHD. Torts commonly related to wrongful discharge claims include defamation and intentional infliction of emotional distress. Defamation is the act of injuring another's reputation through the publication of an injurious falsehood. The defamatory statement may be oral (slander) or written (libel). Defamation may also occur where the defendant's conduct clearly conveys a defamatory message about the plaintiff. The elements required for defamation are: 1. A defamatory statement, 2. Communication to a third party (aka publication), and 3. Harm to the defamed party.5 CCHD placed Brooks on probation for exhibiting poor work attitude, breaching patient confidentiality, and engaging in personal business at work. While on probation, CCHD terminated Brooks' because of additional policy violations. ...read more.