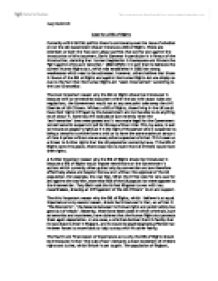 Case for a Bill of Rights

Case for A Bill of Rights Currently within British politics there is controversy over the Issue of whether or not the UK Government should introduce a Bill of Rights. There are members or both the Tory and Labour parities that are for and against the Introduction of this document, David Cameron in particular is In favour of the introduction, claiming that 'current legislation is inadequate and hinders the fight against crime and terrorism.' (BBC NEWS) It is said that he believes the current Human Rights Act, which was established in 2000 has strong weaknesses which need to be addressed. However, others believe that those in favour of the Bill or Rights and against the Human Rights Act are simply so due to the fact that the Human Rights Act 'seem inconvenient' according to the Lord Chancellor. The most important reason why the Bill or Rights should be introduced is because with an entrenched document within the law with exact rules and regulations, the Government would not at any one point take away the civil liberties of UK Citizens. ...read more.

Recently, there have been cases in which criminals, such as terrorists and murderers, have claimed that the Human Rights Act protects them again deportation. In one case, a criminal claimed that his family that he was close to lived in England, and he would be psychologically affected had he been forced to move back to Italy to stay with his other family. The fourth and final reason of importance as to why the Bill of Rights should be introduced is that 'the rule of law' demands a clear statement of citizens rights and duties, which Britain is yet to gain. The population of England, Scotland and Wales do not have anywhere they can go to find their rights if they wish to, as the Americans can. There are no rules or rights given to UK Citizens that are set in stone, which is crucial for a population to have full faith In their Government. The most important reason why the Bill of Rights should not be introduced is because the law within Britain is contradictive of itself and in many cases loopholes are found in the Governments favour, if a Bill of Rights was written, it would be entrenched, concise and precise. ...read more.

The UK is known across the world for being a state where freedom is a priority. However, if a Bill of Rights was ensued, these freedoms would be largely restrained as the rights of the population were regulated and defined. Overall, the argument for a Bill of Rights is far stronger than that against, however the case against a Bill of Rights also has a number of highly valid points which are to be considered. For example, the fact that the rights to be entrenched would be decided by someone currently unknown to the public. Would the Government decide as a whole which rights to embed within the legal system? There would be major disagreements within Government if this were to be the case as the final outcome of these decisions would affect the UK for the rest of the country's existence. The Bill of Rights does seem to be, however, currently a resolution to many problems being faced by the Government and the state. If the safety of the people really is coming to be less important than the rights of an individual as written in the Human Rights Act, the UK are well on their way to self-destruction. Lucy Dark 6L0 ...read more.