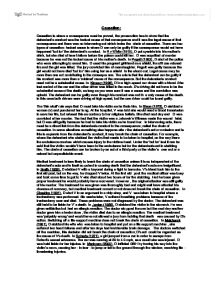 Causation: Causation is where a consequence must be proved, the prosecution has to show that the defendant's conduct was the factual cause of that consequence and it was the legal cause of that consequence and there was no intervening act which broke the chain of causation. There are two types of causation: factual cause is where D can only be guilty if the consequence would not have happened 'but for' the defendant's conduct. In R v White (1910), D put cyanide into his mother's drink, but she died of heart failure before the poison could kill her. D was acquitted of murder because he was not the factual cause of his mother's death. In Pagett (1983), D shot at the police who were attempting to arrest him. D used his pregnant girlfriend as a shield, the offices retuned fire and the girl was killed. The jury convicted him of manslaughter. Pagett was guilty because the girl would not have died 'but for' him using her as a shield in the shoot-out. ...read more.

She died next day and D was convicted of her murder. The fact that the victim was a Jehovah's Witness made the wound fatal, but D was still guilty because he had to take his victim as he found her. In intervening acts, there must be a direct link from the defendants conduct to the consequence; called the chain of causation. In some situations something else happens after the defendant's act or omission and is this is separate from the defendant's conduct, it may break the chain of causation. For example, where the defendant who stabbed the victim that needs to be taken to hospital, on the way there the ambulance crashes which causes injury to the victims head. Under the 'but for' test it can be said that the victim wouldn't have been in the ambulance but for the defendants act in stabbing him. The chain of causation can be broken by an act of a third party or the victim's own act or a natural but unpredictable event. ...read more.

He was given antibiotics but had an allergic reaction. The doctor stopped the use but the next day another doctor gave him a larder dose, the victim died due to an allergic reaction. The medical treatment was 'palpably wrong' and would have not allowed a jury from holding that death was caused by D's action. Switching off a life-support machine does not break the chain of causation. In Malcherek (1981), D stabbed his wife who was taken to hospital and put on a life support machine, she suffered two heart failures and after ten days had irretrievable brain damage. The doctors switched off the machine, this decision did not break the chain of causation; D's act could be regarded as the cause of V's death. In Roberts (1971), a girl jumped from a car in order to escape from Robert's s****l advances. The car was running at 20 to 40 mph, as a result she was injured. D was held liable for her injuries. In Marjoram (2000), D inflicted GBH by forcing his way into the victim's room, causing her - in fear - to jump or fall to the ground through the window, receiving life-threatening injuries. ...read more.