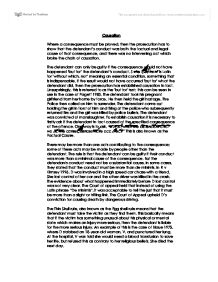 Causation. To establish causation it is necessary to firstly ask if the defendant in fact caused of the specified consequence of the offence.

Causation Where a consequence must be proved, then the prosecution has to show that the defendant's conduct was both the factual and legal cause of that consequence, and there was no intervening act which broke the chain of causation. The defendant can only be guilty if the consequence would not have happened 'but for' the defendant's conduct. Sine qua non" is Latin for "without which, not" meaning an essential condition, something that is indispensable. If the result would not have occurred 'but for' what the defendant did, then the prosecution has established causation in fact. Unsurprisingly, this is referred to as the 'but for' test; this can be seen in use in the case of Pagett 1983. ...read more.

The rule is that the defendant can be guilty if their conduct was more than a minimal cause of the consequence. But the defendants conduct need not be a substantial cause. In some cases, they stated that the conduct must be more than de minimis. In R v Kimsey 1996, D was involved in a high speed car chase with a friend. She lost control of her car and the other driver was killed in the crash. The evidence about what happened immediately before D lost control was not very clear. The Court of appeal held that instead of using the Latin phrase "De minimis", it was acceptable to tell the just that it must be more than a slight or trifling link. ...read more.

The Court of Appeal held that this principle clearly applies to the mental as well as the physical characteristics of the victim, and the courts will rarely make a judgement as to whether the victim's response was reasonable. The defendant is only liable under causation if there is no break in the chain of causation. This is known in latin as Novus Actus Intervenius. The prosecution must prove that there is no break in the chain of causation; in some situations something else happens after the defendant's act or omission and, if this is sufficiently separate from the defendant's conduct, it may break the chain of causation. GIVE A CASE * THE 3 BREAKS - COULORED SHEET * ACTIONS OF A 3RD PARTY * D'S ACTIONS WERE FORESEEABLE * MEDICAL TREATMENT - LIFE SUPPORT MACHINE * PROBLEMS IN THE LAW OF CAUSATION - SECOND SHEET ...read more.