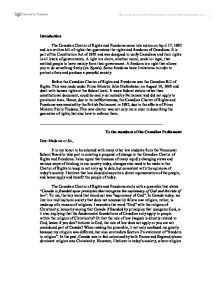 Changes to the Canadian Charter

Introduction The Canadian Charter of Rights and Freedoms came into action on April 17, 1982 and is a written bill of rights that guarentees the rights and freedoms of Canadians. It is part of the Constitution Act of 1982 and was designed to unify Canadians and their rights in all levels of governments. A right is a claim, whether moral, social or legal, that entitled people to have mainly from their government. A freedom is a right that allows you to do something freely (ex. Speak). Some freedoms have limitations in order to protect others and produce a peaceful society. Before the Canadian Charter of Rights and Freedoms was the Canadian Bill of Rights. This was made under Prime Minister John Diefenbaker on August 10, 1960 and dealt with human rights at the federal level. It was a federal statute rather than constitutional document, could be easily corrected by Parliament and did not apply to provincial laws. Hence, due to its ineffectiveness, the Canadian Charter of Rights and Freedoms was enacted by the British Parliament in 1982, due to the efforts of Prime Minister Pierre Trudeau. ...read more.

However, under Section 2a, it states that everyone has a "freedom of conscience". Hence, abortion is a moral decision and a conscience decision. Therefore, according to the charter, a person has the right to decide for themselves whether they want to abort their baby. In British Columbia alone, roughly 14,738 fetuses were aborted in 2004. However, this right contradicts a legal right - that "everyone has the right to life, liberty..." The baby should have a right to life, and if aborted, is deprived of life without any principles of justice. These two clauses hence contradict each other. As well, the "freedom of conscience" can be interpreted as the freedom to make conscience decisions. Hence, does it also imply that a person can legally kill another? To kill another person is a conscience decision and the charter guarantees that everyone has the freedom to make conscience decisions. Although the "freedom of conscience" is a fundamental freedom, I believe that it should be removed from the charter. Section 2b in "Fundamental Freedoms" talks about the right of expression. I believe that this right only applies if the expression is not intentionally made to harm others. ...read more.

According to an online dictionary, "disrepute" means "disfavour". Hence, this can be interpreted that it is legal to withhold evidence if it makes the justice system look bad. I think this is wrong, because it gives the justice system a chance to be corrupt without the public knowing. I do not understand the purpose of this law, hence I think it should be rephrased into "the evidence shall be excluded if it is established to be unrelated to the case ... admission of it in the proceedings would bring the administration of justice into disrepute." Lastly, under "Citation", section 34 states that "This part may be cited as the Canadian Charter of Rights and Freedoms". I believe it means that the whole document, from section 1-34, is known as the "Canadian Charter of Rights and Freedom". However, does it also mean that if any more laws were added, they are hence not part of the Canadian Charter? These are the many notes and questions I had when reading through the Canadian Charter of Rights and Freedoms. I hope that you'll take my ideas into consideration. Thank you for your time. ...read more.