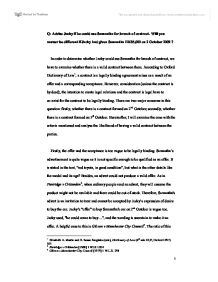 Q: Advise Jacky if he could sue Samantha for breach of contract. Will you answer be different if Jacky had given Samantha HK$5,000 on 2 October 2009? In order to determine whether Jacky could sue Samantha for breach of contract, we have to examine whether there is a valid contract between them. According to Oxford Dictionary of Law1, a contract is a legally binding agreement arises as a result of an offer and a corresponding acceptance. However, consideration (unless the contract is by deed), the intention to create legal relations and the contract is legal have to co-exist for the contract to be legally binding. There are two major concerns in this question: firstly, whether there is a contract formed on 2nd October; secondly, whether there is a contract formed on 5th October. Hereinafter, I will examine the case with the criteria mentioned and analyse the likelihood of having a valid contract between the parties. Firstly, the offer and the acceptance is too vague to be legally binding. Samantha's advertisement is quite vague as it is not specific enough to be qualified as an offer. ...read more.

Jacky may argue that his consideration came later on 5th October. However, consideration has to be co-extensive with the promise for which it supported, not subsequent11. Consequently, the promise between Jacky and Samantha thereby is highly unlikely to be enforced by law; Samantha has no legal obligation in performing her promise on 5th October. Is there a contract formed on 5th October? The answer is very unlikely, due to the absence of meetings of minds. As Samantha had implicitly "rejected his offer" through her relative, Jacky knew that she was no longer minded to sell the car to him (since he got upset on hearing this). This raises the question of whether Samantha's message from her relative is regarded as authoritative as Samantha saying to Jacky personally. The decision made in the Court of Appeal in Dickinson v Dodds12 recognised that an authoritative agent of one party can communicate on behalf of that party to another. Dickinson, the potential buyer was informed by a Mr. Berry, the seller's agent that the seller (Dodds) had been offering or agreeing to sell the property to one Allen. ...read more.