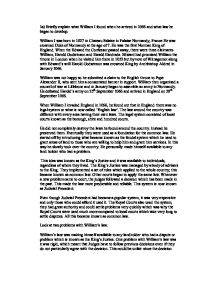 Common Law and Equity - its history and development

1a) Briefly explain what William I found when he arrived in 1066 and what law he began to develop. William I was born in 1027 in Chateau Falaise in Falaise Normandy, France He was crowned Duke of Normandy at the age of 7. He was the first Norman King of England. When the Edward the Confessor passed away, there were three claimants-William, Harold Godwinson and Harald Hardrada. Edward had promised William the throne in London when he visited him there in 1052 but by vote of Witnagemot along with Edward's will Harold Godwinson was crowned King by Archbishop Aldred in January 1066. William was not happy so he submitted a claim to the English throne to Pope Alexander II, who sent him a consecrated banner in support. William then organised a council of war at Lillebone and in January began to assemble an army in Normandy. He defeated Harold's army on 25th September 1066 and arrived in England on 28th September 1066. When William I invaded England in 1066, he found out that in England there was no legal system or what is now called 'English law'. The law around the country was different with every area having their own laws. The legal system consisted of local courts known as the borough, shire and hundred courts. He did not completely destroy the laws he found around the country. ...read more.

The chancellor took his causes in a place called the Court of Chancery. After equity in place for a while, the lawyers that still used the common law rules were arguing back disagreeing with equity while the chancery lawyers were arguing back disagreeing with common law. The common lawyers said equity lacked a repetitive decision so anything could happen while the chancery lawyers said that common law is to inflexible and everything is set in stone. This was eventually settled in The Earl of Oxford's Case (1615). Consider the Earl of Oxford's case and its importance The Earl of Oxford' case is a case where judgement of Chief Justice Coke was allegedly obtained by fraud. The Chancellor issued a common injunction out of the Chancery stopping the enforcement of the common law order. The two courts became locked in a stalemate; the matter was finally referred to the Attorney-General, Sir Francis Bacon. Sir Francis by authority of King James I, upheld the use of the common injunction and came to a conclusion of, when equity and common law collided, equity will prevail. The Earl of Oxford' case was a very important because it made the two systems collide and whichever system prevailed would mean it was superior to it. The two leaders of the new system could not make a decision between them, so they left the decision to the King. ...read more.

The strikers refused to stop striking so they were not granted their injunction. Discuss the modern developments in equity At the start of equity being introduced, it was flexible and was able to create the necessary rules if needed but by the middle of the 17th century the judges began to follow the decisions made by previous judges and by the end of the century, there was an attempt to reduce equity to a more fixed system. They continued to fix the rules of equity and by 1948, the Court of Appeal of Appeal emphasising in the case of Re Diplock, that any claim in equity-" ... must be shown to have an ancestry founded in history and in the practice and precedents of the courts administering equity jurisdiction. It is not sufficient that, we may think that the justice of the present case requires it, we should invent such a jurisdiction for the first time'. Lord Denning was a well known judge of the 20th century gave a lecture called 'The Need for a New Equity' in which he said in the Judicature Acts, Equity has lost its power. He was worried that judges were not able to adapt the law to changing conditions. He had personally been responsible for developing the new equitable, principle of promissory estoppel in the High Trees Case. This introduced an element of fairness to contract law. Estoppel is a rule of law preventing someone going back on a promise not to enforce their rights under a contract. ...read more.

Summary:
This piece (consisting of 7 short answers) is generally correct, though some of the language used could be more accurate, and the discussion on the modern use of equity could certainly be improved.
Rating: ***