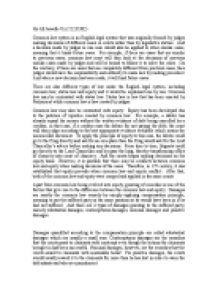 ﻿Ho Jill Jesselle Uy (52235382) Common law system is an English legal system that was originally formed by judges making decisions of different cases in courts rather than by legislative statues. And a decision made by judges in one case would also be applied to other similar cases, meaning that it binds future cases. For example, if there are cases that are similar to previous cases, common law court will then look at the decisions of previous similar cases made by judges and will be bound to follow it to solve the cases. On the contrary, if there are cases that are completely different from previous cases, then judges would have the responsibility and authority to make law by making precedent. And when a new decision has been made, it will bind future cases. There are also different types of law under the English legal system, including common law, statue law and equity and it would be explained one by one. ...read more.

Injunction is also an order made by courts to stop someone from doing something under the situation where damages are not an adequate remedy. Law of trusts is also another important aspect that applies under a situation where one person (trustee) holds something for another person (a beneficiary) and there will be rights and duties given to each person among the relationship. Also, there are different sources of law, including primary sources and secondary sources. Primary sources are the legal and authoritative publications of law produced by law-making bodies, including courts, parliament and other statutory authorities. Secondary sources are the materials that comment on the legislation and case law, including textbooks of law, legal dictionaries and journals. To conclude, English legal system can be sorted into different types of law, including common law, statue law and equity and each of them has its own characteristics. And there are 2 sources of law, including primary and secondary sources. 769 words ...read more.