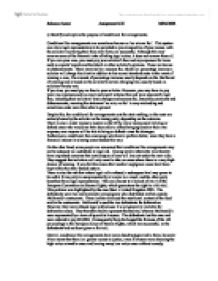 a) Identify and explain the purpose of conditional fee arrangements. Conditional fee arrangements are sometimes known as 'no win no fee'. This system can allow legal representation to be provided to you irrespective of your means, with the solicitor recovering their fees only if you are successful. Although this may remove some of the financial risks of taking legal action, it does not remove them all. If you win your case, you must pay your solicitor's fees and any expenses for items such as experts' reports and barrister's or other solicitor's opinions. These are known as disbursements. There may also be a success fee, which is a percentage increase a solicitor will charge his client in addition to his normal standard costs in the event of winning a case. The amount of percentage increase usually depends on the likelihood of winning and is based on the solicitor's normal charging rate, usually based on solicitors' hourly rate. If you lose, you need pay no fees to your solicitor. However, you may have to pay your own expenses such as court and expert witness fees and your opponent's legal fees, including their solicitors' basic charges and success fee, insurance premiums and disbursements; meaning the statement 'no win, no fee' is very misleading and sometimes costs more than what is gained. ...read more.

Merits tests assess whether the applicant's case is likely to succeed, and whether it is sufficiently important to justify state funding. The specific details of the means and merits tests varied according to the type of legal aid, and some imposed neither test. The system of legal aid was set up in 1949 to ensure access to justice for those on low incomes who would otherwise have been able to afford it. This does not mean, however, that they all received access. It still left a huge proportion of people denied access because they could not afford it, yet were not eligible for legal aid. Lawyers constantly claimed that the system was underfunded and that lawyers working within it were badly paid. The underfunding risked creating a second-class service, not because of the lack of quality in the lawyers themselves, but because they simply could not afford to spend the same amount of time on a case as a privately funded lawyer. It was also discovered in 1997 that over the previous year more than 25,000 individuals who were granted legal aid were later discovered not to have been entitled to it, costing the government up to �60 million a year. The standard of legally aided criminal defence work was also very low. A vast quantity was carried out by unqualified staff; solicitors pushed clients towards pleading guilty rather than taking the time to prepare an effective defence. ...read more.

Direct funding is provided for different categories of legal service such as Advice and Assistance, which has replaced the 'Green Form' scheme. Funding is available for the provision of advice and assistance from a solicitor, including general advice, writing letters, negotiating, getting a barrister's opinion and preparing a written case. Funding is also available for advocacy assistance, which covers the costs of a solicitor preparing a client's case and their initial representation in certain proceedings in both the magistrates' court and Crown Court, and in certain other circumstances. When a person has been charged with a criminal offence, the third category, representation, covers the cost of a solicitor o prepare their defence and to represent them in court. It may also be available for a bail application. It will sometimes pay for a barrister, particularly for the Crown Court and for the cost of an appeal. State funding for criminal cases, because of The Criminal Defence Act 2006, is now subject to means testing in the magistrates' court; and means testing in the Crown Court will be piloted from the end of 2007. This would suggest that the government are finding the cost of the criminal legal aid too high and are seeking to reduce the cost for the state, stating that the government are more interested in trying to save money, rather than ensuring everyone has access to justice; in effect, by introducing the means testing for criminal cases the government are limiting people's access to justice. Rebecca Turner Assignment 9.18 08/04/2009 ...read more.