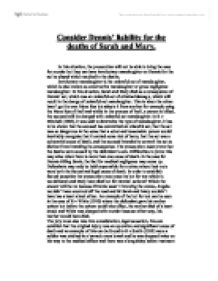 Consider Dennis' liability for the deaths of Sarah and Mary.

In order to establish factual causation the prosecution must pass the but for test which is would Sarah and Mary have died but for Dennis' actions? Which the answer will be no because if Denis wasn't throwing the stones, Angela wouldn't have swerved off the road and hit Sarah and Mary wouldn't have has a heart attack either. An example of the but for test can be seen in the case of R v White (1910) where the defendant gave his mother poison but before the poison could take effect, the mother died of a heart attack and White was charged with murder because either way, his mother would have died. The jury must also take into consideration, legal causation, this can establish that the original injury was an operative and significant cause of death and an example of this can be found in R v Smith (1959) ...read more.

Therefore, Dennis will be charged with unlawful act manslaughter were his Mens Rea will come from the throwing of the stones which is criminal damage. An example of a similar case is R v Church (1965) where the accused and a women went back to his car for s*x, the accused couldn't satisfy her so she slapped him and he retaliated and knocked her unconscious. Thinking she was dead, he threw her in the river where in fact, she was still alive but later died due to drowning. In this case, the judge stated that for such a verdict to inexorably to follow, the unlawful act must be such as all sober and reasonable people would recognise risk of some harm may result in from their actions and in Dennis' case, any reasonable or sober person could see the risk so he will be liable for the deaths of Sarah and Mary. ...read more.