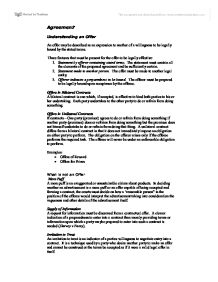 Agreement Understanding an Offer An offer may be described as an expression to another of a willingness to be legally bound by the stated terms. Three features that must be present for the offer to be legally effective: 1. Statement by offeror containing stated terms. The statement must contain all the elements of the proposed agreement and be sufficiently certain. 2. Statement made to another person. The offer must be made to another legal entity. 3. Offeror indicates a preparedness to be bound. The offeror must be prepared to be legally bound upon acceptance by the offeree. Offers in Bilateral Contracts A bilateral contract is one which, if accepted, is effective to bind both parties to his or her undertaking. Each party undertakes to the other party to do or refrain from doing something. Offers in Unilateral Contracts If contracts - One party (promisor) agrees to do or refrain from doing something if another party (promisee) does or refrains from doing something but the promisee does not himself undertake to do or refrain from doing that thing. A unilateral contract differs from a bilateral contract in that it does not immediately impose an obligation on either party to perform. The obligation on the offeror arises only if the offeree performs the required task. ...read more.

An offer may be terminated by: a) Revocation by the offeror Revocation is the formal withdrawal of the offer by the offeror. Before acceptance, an offer can be freely revoked unless a promise by the offeror to keep it open for a fixed period is supported by consideration or under seal (Routledge v Grant (1828)). A revocation will only be effective once it has been communicated to and received by the offeree (Bryrne v Van Tienhoven (1880). In unilateral contracts, the offer cannot be withdrawn after the offeree has begun to perform the necessary condtions of acceptance of the offer and completion of the contract (Abbot v Lance (1860)). b) Reject by the offeree The rejection must be communicated to the offeror before it is effective. Once rejected, an offer cannot be later accepted. If an offeree attempts to accept the offer but introduces new terms, the offeree is rejected the offer and making a counter offer (Stevenson Jaques & Co v McLean (1880)). c) Lapse of time An offeror may stipulate that his or her offer must be accepted within a certain period of time, and if the offeree fails to accept, the offer will lapse. If no time is prescribed, the offer must be accepted within a reasonable time (Ramsgate Victoria Hotel Co v Montefiore) ...read more.

If the offeror says or implies that actual notification is required before an agreement if formed the postal acceptance rule will be displace (Bressan v Squires). d) Revocation of the acceptance prior to receipt The agreement is formed when the offer is accepted, once accepted the offer can not be refused or revoked. Acceptance in Unilateral Contracts Acceptance commonly by conduct The requirement for acceptance to be communicated is often impliedly waived. Acceptance is effected by the offeree performing the requirements specified by the offeror. Withdrawal of an offer after acceptance has commenced Generally, once an offeree has begun to accept the offer by performing the acts stipulated, it is likely to be too late for the offeror to withdraw the offer and claim there has been no contract formation. Who may accept an offer? An offer can only be accepted by the person to who it was made. Acceptance may be communicated only by the offeree or his or her agent (Powell v Lee (1908)). If an offer is made to the public at large it can sometimes be accepted by a number of people. In Carlill's Case the offer was capable of acceptance by anyone who qualified under the terms of their offer ie anyone who purchased a smoke ball, however, in the case of a reward, while many people may have the information which qualifies them for the reward, only the first person to come forth will be eligible. ...read more.