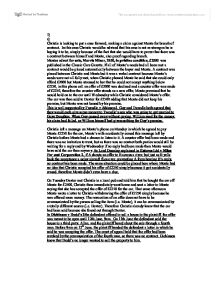 1) a) Christie is looking to put a case forward, making a claim against Monte for breach of contract. In this case Christie would be advised that his case is not as strong as he is hoping it to be, simply because of the fact that she would have to prove that there was a contract between himself and Monte, also proof regarding breach. Montes advert for sale, Morris Minor, 1950, in pristine condition, �2500 was published in the Classic Cars Gazette. If all of Monte's needs had all been met a contract would be placed automatically between the buyer and Monte. A contract was placed between Christie and Monte but it was a verbal contract because Monte's needs were not all fully met, when Christie phoned Monte he said that she could only afford �2000 but Monte stressed to her that he could not accept anything below �2250, in this phone call an offer of �2000 was declined and a counter offer was made of �2250, therefore the counter offer stands ...read more.

As Lord Denning explained in Entores Ltd v Miles Far east Corporation 2, if A shouts an offer to B across a river, but just as B yells back the acceptance a noisy aircraft flies over, preventing A from hearing B's reply, no contract has been made. The same situation could be placed here where Monte had no idea that Christie accepted his offer of �2250 simply because it got accidentally erased, therefore Monte didn't even have a clue. On Tuesday Dexter met Christie in a local pub and told him that he bought the car off Monte for �2500, Christie then immediately went home and sent a letter to Monte saying that she has accepted the offer of �2250 for the car. That same afternoon Monte wrote a letter to Christie withdrawing the offer of �2250 simply because he was offered more money. The revocation of an offer does not have to be communicated by the person selling the item (i.e. Monte), it can be communicated by a totally different source (i.e. ...read more.

If the postal rule were observed this would be the case if the above were to be true. As Justice Linedley J said: "An uncommunicated revocation is for all practical purposes and in point of law no revocation at all....., it may be taken as now settled that where an offer is made and accepted by the letters sent through the post, the contract is completed the moment the letter accepting the offer is posted."4 Having looked at the whole case there are certain facts that may have gone in favour of Christie, but having analysed this case and comparing to bits off other cases which were relevant, I think that Christie would be advised not to take any action against Monte, due to he fact that it would be very difficult to prove any sort of breach of contract and also she would have had to spend the �2250 or even more to cover the legal costs. ...read more.