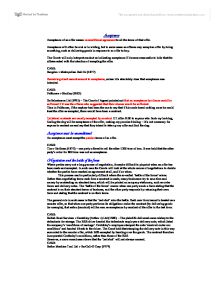 Acceptance Acceptance of an offer means unconditional agreement to all the terms of that offer. Acceptance will often be oral or in writing, but in some cases an offeree may accept an offer by doing something, such as delivering goods in response to an offer to buy. The Courts will only interpret conduct as indicating acceptance if it seems reasonable to infer that the offeree acted with the intention of accepting the offer. CASE: Brogden v Metropolian Rail Co (1877) Remaining silent cannot amount to acceptance, unless it is absolutely clear that acceptance was intended. CASE: Felthouse v Bindley (1862) Re Selectmove Ltd (1995) - The Court of Appeal pointed out that an acceptance by silence could be sufficient if it was the offeree who suggested that their silence would be sufficient. Thus in Felthouse, if the nephew had been the one to say that if his uncle heard nothing more he could treat the offer as accepted, there would have been a contract. Unilateral contracts are usually accepted by conduct. ...read more.

will be seen as acceptance by conduct of the offer in the last form. CASE: British Road Services v Crutchley (Arthur v) Ltd (1968) - The plaintiffs delivered some wiskey to the defendants for storage. The BRS driver handed the defendants employee a delivery note, which listed his company's 'conditions of carriage'. Crutchley's employee stamped the note 'received under our conditions' and handed it back to the driver. The Court held that stamping the delivery note in this way amounted to the counter offer, which BRS accepted by handing over the goods. The contract therefore incorporated Cruthcley's conditions, rather than those of the BRS However, a more recent case shows that the 'last shot' will not always succeed. CASE: Butler Machine Tool Ltd v Ex-Cell-O Corp (1979) Acceptance of unilateral contracts It has generally been assumed that there is no acceptance until the act has been completely performed - e.g. If John says to Steve, that he will give Steve �5 if Steve washes his car, Steve would not be entitled to the money until the job is finished, and Steve could not wash half the car and ask for �2.50. ...read more.

The Court of Appeal held that it was too late to do this. The part-performance by the son and daughter-in-law constituted an acceptance of the contract and the father (his representatives) was bound by the resulting contract unless the son and daughter-in-law ceased to make the payments, in which case the offer was no longer binding. Requests for information A request for information about an offer (such as whether delivery could be earlier than suggested) does not amount to a counter offer, so the original offer remains open. CASE: Stevenson v McLean (1880) - The defendant made an offer on a Saturday to sell iron to the plantiffs at a cash on delivery price of 40 shillings, and stated that the offer would remain available until the following Monday. The plaintiffs replied by asking if they could buy the goods on credit. They received no answer. On Monday afternoon they contacted the defendant to accept the offer, but the iron had already been sold to someone else. When the Plaintiffs sued for breach of contract, it was held that their reply to the offer had been merely a request for information, not a counter offer, so the original offer still stood and there was a binding contract. ...read more.

Overall, a detailed examination of the key authorities. Reference to acceptance of the offer of a unilateral contract (counter offers, auctions, tenders); certainty of agreement (Scammel v Ousten); and acceptance in the context of machines (Thornton v Shoe Lane Parking) could all be made to achieve better marks.