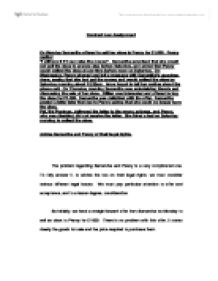 Contract Law Assignment On Monday Samantha offered to sell her oboe to Penny for �1,000. Penny replied "I will buy it if I can raise the money". Samantha promised that she would not sell the oboe to anyone else before Saturday, and added that Penny could collect the oboe at any time before noon on Saturday. On Wednesday, Penny phoned and left a message with Samantha's daughter, Anne, saying that she had got the money and would collect the oboe on Saturday morning about 10.30am. Anne forgot to tell her mother about the phone call. On Thursday morning Samantha was entertaining friends and discussing the sale of her oboe. Gillian was interested and offered to buy the oboe for �1,300. Samantha was delighted with the offer. Samantha posted a letter later that day to Penny saying that she could no longer have the oboe. Pat, the Postman, delivered the letter to the wrong address, and Penny, who was disabled, did not receive the letter. She hired a taxi on Saturday morning to collect the oboe. Advise Samantha and Penny of their legal rights. The problem regarding Samantha and Penny is a very complicated one. To fully answer it, to advise the two on their legal rights, we must consider various different legal issues. We must pay particular attention to offer and acceptance, and to a lesser degree, consideration. ...read more.

The letter was then posted, but unfortunately was delivered to the wrong address by the postman and Penny never received the letter. Could this letter of revocation be covered by the postal rule? The rule that regards letters of acceptance, which states that the acceptance is binding from when the letter is posted, not when or if received. As Penny had received no letter of revocation, and therefore had no reason to be suspicious that there was anything going awry with proceedings, as she was disabled she had hired a taxi on Saturday morning to take her to Samantha's home to collect the oboe at 10.30am. She had also placed the phone call and had no idea that the message had not been passed on. When Penny initially accepted Samantha's offer to buy her oboe, she used the words ' I will buy it if I can raise the money'. This constitutes a conditional acceptance, i.e. the transaction could not take place unless a condition was met. Conditional acceptance is not binding in a contract, therefore in the first instance no binding acceptance was given so no contract was formed. The second time Penny tried to contact Samantha regarding the purchase, she made a phone call. She did not however speak to Samantha herself but Samantha's daughter Anne. If Penny had spoken to Samantha, then this would have acted as final agreement, or acceptance, and the contract would have been binding. ...read more.

Although neither of these are extravagant gestures, the fact that she has taken a burden upon herself show that the consideration has been made.3 Therefore, it is not valid for Samantha to revoke the offer during the time allowed for Penny to accept the offer made. Up until now, we can see that there has been no acceptance by Penny, or revocation of the offer made by Samantha. Therefore, in reality, there is no contract, but we can say that, as neither of the parties knows that their end of the contract has fallen through, and take into account the consideration by Penny, there is a contract inferred by the conduct of the two parties involved. In addition, the contract could still be accepted and held by Penny on the morning of collection. To summarise Penny's situation, she has not presently accepted the offer but still had the chance to do so. In Samantha's case, her attempts to revoke her offer to accept Gillian's were invalid. The reason for this is that it is not possible to revoke a 'firm offer' during the allotted time when consideration has been shown. Therefore, Samantha must reject Gillian's offer to buy the oboe and comply with the inevitable acceptance from Penny on the Saturday morning when she arrived to collect the oboe. 1 Denning L.J. Entores Ltd v Miles Far East Corporation, [1955] 2 All ER 493 2 Byrne & Co. v Leon Van Tienhoven & Co. [1880] 5 CPD 344 3 See case of Thomas v Thomas [1842] 2 QB ; 114 ER 330 ...read more.