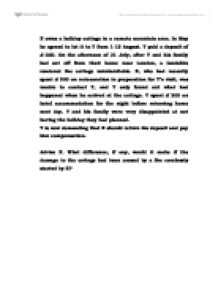 X owns a holiday cottage in a remote mountain area. In May he agreed to let it to Y from 1-15 August. Y paid a deposit of � 200. On the afternoon of 31 July, after Y and his family had set off from their home near London, a landslide rendered the cottage uninhabitable. X, who had recently spent � 500 on redecoration in preparation for Y's visit, was unable to contact Y, and Y only found out what had happened when he arrived at the cottage. Y spent � 200 on hotel accommodation for the night before returning home next day. Y and his family were very disappointed at not having the holiday they had planned. Y is now demanding that X should return his deposit and pay him compensation. Advise X. What difference, if any, would it make if the damage to the cottage had been caused by a fire carelessly started by X? ...read more.

Upon discovery of the frustration event one need to examine, whether the effect of the doctrine can be limited as Viscount Simmonds in Taskiroglou stated that this doctrine must be applied within a very narrow limits. As it is not to be invoked lightly to relieve contracting parties of the imprudent commercial bargain (bad bargain) Lord Roskill in Pioneer Shipping. Here Y may argue that the frustration event may be reasonably foreseeable. If the event is foreseeable there is no frustration, Walton & Harvey v Walker & Homfrays. However a person of reasonable intelligence would not have regarded these (landslide) likely to occurs (Treitel) Upon establishing the existence of the frustrating event next one need to examine the extent of remedies. Prior to 1943 the law was as in the case of Fibrosa, which says the loss lies where it falls. This means right and liabilities already acquired up to the time of termination remain intact but subsequent obligations are discharged. ...read more.

But applying the principle in Jackson v Horizon Holiday, Y may able to claim compensation for his family. However the avenue is rejected in Woodar Development v Wimpey Construction, but in Linden Gardens Trust it was stated that if the purpose of the contract that enter on behalf of the 3rd parties is for their enjoyment this is enforceable. With regard to the second part of the question if the damage to the cottage had been caused by a fire carelessly started by X. Then X may not be able to establish frustration. Because frustration must not be self - induced, Maritime National Fish v Ocean Trawler. The burden of proving the events that frustrated the contract is on the party alleging frustration. If there is an allegation of self - induced frustration, the burden lies on the person alleging self - inducement. As from the facts it is clear that the frustrating events is of self - induced frustration and Y bears the burden of proving so. And if Y succeed, the remedy would lie under breach of contract as discussed above. ...read more.