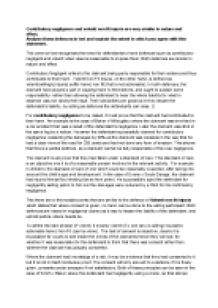 Contributory negligence and volenti non fit injuria are very similar in nature and effect. Analyse these defences in tort and explain the extent to which you agree with this statement.

﻿Contributory negligence and volenti non fit injuria are very similar in nature and effect. Analyse these defences in tort and explain the extent to which you agree with this statement. The common law recognises the need for defendants to have defences such as contributory negligent and volenti when deems reasonable to impose them. Both defences are similar in nature and effect. Contributory Negligent refers to the claimant being party responsible for their actions and thus contributes to their harm. Volenti Non Fit Injuria, on the other hand, is defined as volenti(willingly) injuria( suffer harm) non fit( that is not actionable). In both defences, the claimant have played a part in causing harm to themselves, and ought to sustain some responsibility- rather than allowing the defendant to bear the whole liability for what in essence was not wholly their fault. Their similarities are great as in they lessen the defendant?s liability, by acting as defences the defendants can raise. zl For contributory negligence to be raised, it must prove that the claimant had contributed to their harm. ...read more.

Where the claimant had knowledge of a risk, it may be evidence that they had consented to it but it is not in itself conclusive proof. The consent will only amount to a defence if it is freely given, consents under pressure if not satisfactory. Both of these principles can be seen in the case of Smith v Baker where the defendant had negligently using a crane, so that stones swung over the claimant?s head while he worked. The claimant was aware of it happening, and told the employer but it was to no avail. When he continued to work, he was injured as a stone did fall on his head. The defendant tried to plead volenti, when he continued to work, he knew of the risk and was taking it. However this plea failed as taking on a work which was intrinsically dangerous would amount to consenting to the risk but a job which is not supposedly dangerous but is will not. This differs in Contributory Negligence when usually knowledge of a risk and acting on it may amount to a person being negligent. ...read more.

Their freedom of choice has been forgone in exchange of their moral and social obligation. For example In the case of Haynes v Harwood, 2 horse bolted and the claimant was a policeman who was under the duty to keep peace, had tried to rescue the horses but suffered injuries as a result. The defendant could not use the plea of volenti against them. The defence of contributory negligence used to be a full defence when the claimant has contributed to their injury, they would not be able to claim. However this is extremely unjust and the Law Reform changed it, into a partial defence, the claimant would still be able to claim, but the defence may apply, the defendant may only be liable for the part of the harm that they have contributed. Volenti, on the other hand, if applied is a full defence. Though there are many similarities in both defences, there exist some differences making them to be applicable in different circumstances and garner different effects. Where one is a partial defence and another is a full defence, the former will leave the plaintiff with no remedy and the second with reduced remedy. ...read more.