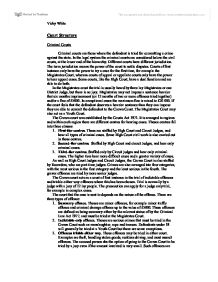 Court Structure Criminal Courts Criminal courts are those where the defendant is tried for committing a crime against the state. In the legal system the criminal courts are considered below the civil courts, at the lower end of the hierarchy. Different courts have different jurisdiction. The term jurisdiction means the power of the court to settle disputes. Courts of first instance only have the power to try a case for the first time, for example the Magistrates Court, whereas courts of appeal or appellate courts only have the power to hear appeal cases. Some courts, like the High Court, have a dual function and are able to do both. In the Magistrates court the trial is usually heard by three lay Magistrates or one District Judge, but there is no jury. Magistrates may not impose a sentence heavier that six months imprisonment (or 12 months of two or more offences tried together) and/or a fine of �5000. In exceptional cases the maximum fine is raised to �20 000. If the court feels that the defendant deserves a heavier sentence than they can impose they are able to commit the defendant to the Crown Court. The Magistrates Court may also act as a Youth Court. The Crown court was established by the Courts Act 1971. It is arranged in regions and within each region there are different centres for hearing cases. Theses centres fall into three classes: 1. First-tier centres. These are staffed by High Court and Circuit Judges, and hear all types of criminal cases. Some High Court civil work is also carried out in these centres. 2. Second-tier centres. Staffed by High Court and circuit Judges, and hear only criminal cases. ...read more.

All other claims may be issued in either court, although if the claim is of a high value, complexity or general importance then it should be started in the High Court. Once a claim becomes defended, it will be allocated by the court to one of three tracks: * The small claims track for claims up to �5000, or �1000 for a personal injury claim. * The fast track for claims not exceeding �15 000 and which are not otherwise allocated to the small claims track. * The multi track for all other claims. The High Court is a court of first instant for civil cases. It has three divisions, each with a president and a number of High Court Judges. Cases in the High Court are heard by a single judge sitting alone, although there is occasionally a jury of 12 in the Queen's Bench Division for certain types of case. The divisions of the High Court are as follows: 1. Queens Bench Division. It hears cases in tort and contract and the recovery of land. Cases are usually heard by a single judge unless it is a case to do with the person's reputation when they will be tried by jury. There are presently 70 judges of the Division. In London the judges are assisted by nine Masters of the Queens Bench Division, and in the provinces by District Judges. The Division includes some specialist courts such as the Admiralty Court and the Commercial Court. 2. Chancery Division. The Chancery Division is headed by the Chancellor. It hears mainly cases involving finance and property such as trusts, mortgages, administration of estates, companies, taxation and patents. ...read more.

7. The powers of the Council on Tribunals are too limited. The Court of First Instance The Court of First Instance is an EU court and was established in 1989 to reduce the very large workload of the ECJ. One judge from each Member sate sits in the CFI. The jurisdiction of the CFI includes: 1. disputes between the EU institutions and their officials and staff 2. actions brought against the Commission by businesses 3. actions brought against the EU institutions by individuals or businesses 4. restricted power to implement the EU competition rules, including related matters such as levies, production, prices, subsidies and agreements. The European Court of Justice Art 220 EC Treaty states that the ECJ's purpose is to ensure that the implementation and application of this Treaty the law is observed. Like the Court of First Instance the ECJ consists of one judge from each member state, serving for a renewable six year term. They are assisted by eight Advocates General, who are independent, and whose purpose is to advise them. The ECJ has two types of jurisdiction: 1. Direct actions against Member States for failing to fulfil their obligations under EC law. 2. Preliminary rulings, in which any court or tribunal in any Member State may ask the ECJ, under Art 234 EC Treaty, for a ruling on a question of interpretation or validity of a point of EC law that is necessary in order for it properly to determine a case before it. The European Court of Human Rights. The ECtHR hears cases concerning breaches of the European Convention of Human Rights, which was signed in 1951 by a number of European countries, including the UK. ?? ?? ?? ?? Vicky White ...read more.