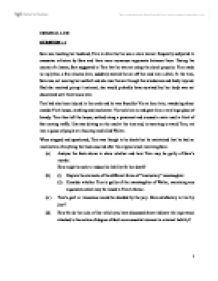 CRIMINAL LAW QUESTION : 1 Sara was teaching her husband, Tom to drive but he was a slow learner frequently subjected to excessive criticism by Sara and there were numerous arguments between them. During the course of a lesson, Sara suggested to Tom that he was not using the clutch properly. Tom made no reply but, a few minutes later, suddenly steered the car off the road into a ditch. At the time, Sara was not wearing her seatbelt and she was thrown through the windscreen and badly injured. Had she received prompt treatment, she would probably have survived but her body was not discovered until three hours later. Tom had also been injured in the crash and he was found by Vic an hour later, wandering about outside Vic's house, rambling and incoherent. Vic took him in and gave him a very large glass of brandy. Tom then left the house, walked along a pavement and crossed a main road in front of fast moving traffic. Una was driving on the road at the time and, in swerving to avoid Tom, ran into a queue of people at a bus stop and killed Walter. When stopped and questioned, Tom was though to be drunk but he maintained that he had no recollection of anything that had occurred after the original crash involving Sara. (a) Analyse the facts above to show whether and how Tom may be guilty of Sara's murder. How might he seek to reduce his liability for her death? (b) (i) Explain the elements of the different forms of "involuntary" manslaughter (ii) Consider whether Tom is guilty of the manslaughter of Walter, examining any arguments which may be raised in Tom's favour. ...read more.

The question to be posed is - is the event which caused death, namely the collision by Una into Walter, a reasonably foreseeable or natural consequence of Tom's act of crossing the main road the way he did? Considering the nature of the road and the condition of the traffic etc it is likely for the court to answer this question in the affirmative. If causation is established then the next question for the jury is - having regard to the risk of death involved, was the negligent conduct of Tom so bad in all the circumstances as to amount in their judgment to a criminal act? If they again answer this question in the affirmative, then liability for manslaughter by gross negligence would be established. If prima facie liability is established, the facts seem to indicate that it is open for Tom to raise the defence of automatism. He would have to raise preferably medical evidence to show that at the material time his actions were involuntary in the sense that there was a total lack of control of the bodily actions by the mind which was caused by some external factor. See BRATTY v A-G for NORTHERN IRELAND. Here, it has to be shown that the shock of the 'accident' has caused him to act as an automaton at the material time. There is evidence that he has consumed alcohol before the event. If there is proof that the state of automatism was caused by the alcohol, then that automatism would be self-induced and would not avail him a defence, manslaughter being a basic intent crime. On the other hand intoxication by itself could not be raised as a defence for the same reason. If automatism is successfully established, it would lead to Tom's acquittal. ...read more.

was a reasonably foreseeable consequences of Ann's act (or her omission in failing to switch off the engine). The jury's decision would depend on the consideration of all the circumstances surrounding the incident, including the ages of the children. Assuming causation is established, the Prosecution would have to prove that Ann's act of quitting the car with the engine running or failing to put off the engine is a criminal offence under the Road Traffic or any other rules. (see Arobieke). Any criminal offence can be the basis of unlawful act manslaughter. See R v CATO. If it is so established, then they have to show that the act was such that a reasonable man would forsee is likely to cause harm (R v CHURCH). Such risk in this situation may not be too difficult to establish. There is no requirement in law that the act or omission ought to be 'directed' at the victim. See R v GOODFELLOW. Ann can alternatively be charged for manslaughter by gross negligence. Here, it is irrelevant whether or not her act or omission would have constituted a criminal offence. The law with respect to killing by gross negligence has recently been restated in R v ADOMAKO (1995). It involves causing death in circumstances where the risk of death or grievous bodily harm is reasonably foreseeable but the defendant fails to foresee it and his failure is so serious as to show extreme disregard for the life and safety of others. The question for the jury here is whether having regard to the risk of serious injury to the children, the conduct of Ann was so bad in all the circumstances as to amount in their judgment to a criminal act or omission. ?? ?? ?? ?? 1 ...read more.