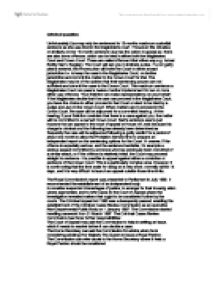 Criminal question - Unfortunately Lisa may only be sentenced to 18 months maximum custodial sentence as she was tried in the Magistrate's court.

Criminal question: Unfortunately Lisa may only be sentenced to 18 months maximum custodial sentence as she was tried in the Magistrate's court. If however this did arise, or similarly on her 18-month sentence Lisa has the option to appeal as there are also some offences, which can be tried in either both the Magistrates Court and Crown Court. These are called offences tribal either way e.g. Actual Bodily Harm, Burglary. The Court will ask you to indicate a plea. If a not guilty plea is entered, the Prosecution will invite the Court to either accept jurisdiction i.e. to keep the case in the Magistrates Court, or decline jurisdiction and commit the matter to the Crown Court for trial. ...read more.

When matters are to proceed in the Crown Court, the case will be adjourned for a committal hearing. At the hearing, if your Solicitor considers that there is a case against you, the matter will be committed to a named Crown Court. Bart's sentence seems just however he can appeal to the court of appeal or House of Lords because his charge is criminal and the following has already been determined as frequently the case will be adjourned following a guilty verdict for a period of about one month to allow the Probation Service time to prepare an independent report on the sentencing options for the Court. However, if the offence is especially serious, and the sentence inevitable, for example a serious assault committed by someone who has previously been convicted of a similar attack, or if the offence is relatively trivial, the Court may proceed straight to sentence. ...read more.

and to refer cases to the Court of Appeal where the investigation revealed matters that ought to be considered further by the courts. The Criminal Appeal Act 1995 was subsequently passed, enabling the establishment of the Criminal Cases Review Commission as an executive Non-Departmental Public Body on 1 January 1997. The Commission started handling casework from 31 March 1997. The Criminal Cases Review Commission has three further responsibilities: The Court of Appeal may ask the Commission to help in settling an issue, which it needs to resolve before it can decide a case; The Home Secretary can ask the Commission for advice when he is considering advising Her Majesty The Queen to issue a Royal Pardon; The Commission can refer cases to the Home Secretary where it feels a Royal Pardon should be considered. ...read more.