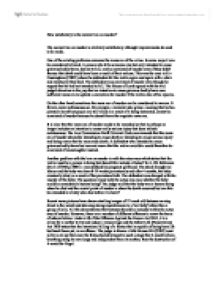 How satisfactory is the current law on murder? The current law on murder is relatively satisfactory although improvements do need to be made. One of the existing problems concerns the mens rea of the crime. In some ways it can be considered to broad. A person who kills someone else but only intended to cause grievous bodily harm, but not to kill, can be convicted of murder even if they didn't foresee that death could have been a result of their actions. This was the case in R v Cunningham [1981] where the defendant hit the victim again and again with a chair and eventually they died. The defendant was convicted of murder even though he argued that he had not intended to kill. The House of Lords agreed with the trial judge's direction to the jury that an intention to cause grievous bodily harm was sufficient mens rea to uphold a conviction for murder if the victim dies of his injuries. ...read more.

Recent news pictures have shown startling images of 12 week old foetuses moving about in the womb and showing strong resemblances to a 'real baby' rather than a group of cells. All this demonstrates that foetuses should be included within the actus reus of murder. However, there are a number of different offences to cover the harm of unborn babies. Under s.58 of the Offences Against the Person Act 1861, it is a crime for a mother to try and induce a miscarriage and the Infant Life (Preservation) Act 1929 states that the intentional killing of a foetus that is capable of being born life but hasn't been yet, is an offence. The judge in Rance v Mid-Downs HA [1991] went as far as to say that once the foetus had developed to such a stage that it could be born breathing using its own lungs and independent from its mother, then the destruction of it would be illegal. ...read more.

However, Lord Bingham argues that abolishing the mandatory life sentence would allow judges to be more leniently. There are problems with each argument but something needs to be done to make the law fairer. Perhaps the answer is to create separate offences rather than the single crime of murder. But how could you classify all of the different types of murder and the motives behind them? The most appropriate suggestion seems to be to abolish the mandatory life sentence and allow the jury some discretion in deciding how serious they think the murder is therefore helping the judge to pass a suitable sentence. All in all the current law on murder is fairly satisfactory although the problems raised need to be dealt with so that everyone who has committed this offence can be treated fairly with respect to the type of murder they have carried out and their motives behind it. The law also needs to be amended so that every victim of murder (e.g. a foetus) is treated equally. ...read more.