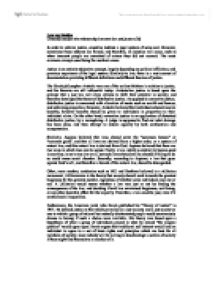 Critically analyse the relationship between law and justice.

Law and Justice Critically analyse the relationship between law and justice (20) In order to achieve justice, countries institute a legal system of some sort. However, sometimes those systems are flawed, and therefore, an injustice will occur, such as when innocent people are convicted of crimes they did not commit. The most common example used being the numbers cases. Justice is an entirely subjective concept, largely depending on political affiliation, and previous experience of the legal system. Similarly to law, there is a vast amount of documentation providing different definitions and different theories of justice. The Greek philosopher Aristotle was one of the earliest thinkers in relation to justice, and his theories are still influential today. Aristotelian justice is based upon the premise that a just law will allow citizens to fulfil their potential in society, and therefore developed the theory of distributive justice. As opposed to corrective justice, distributive justice is concerned with allocation of assets such as wealth and honour, and achieving proportion. However, Aristotle believed that individuals should receive benefits; however benefits should be given to individuals in proportion to their individual claim. On the other hand, corrective justice is an application of disturbed distributive justice, by a wrongdoing. A judge is supposed to find out what damage has been done, and then attempt to restore equality by both confiscation and compensation. Similarly, Aquinas believed that laws should serve the "summum bonum" or "common good", and that all laws are derived from a higher order, or a system of natural law, and this natural law is derived from God. ...read more.

The Court of Appeal by a majority said Miller should succeed, and that it was no defence that she had come to the nuisance rather than vice versa. But no injunction should issue because the defendant's activities were socially beneficial and because the claimant had come to the nuisance with her eyes open. A fourth type of substantive justice is the partial injunction, as seen in Kennaway v Thompson. The defendant was sued because they were allowing water sports on Lake Windermere that were causing a nuisance to the claimant. Whilst the courts recognised that the defendant's behaviour was unreasonable, it did also carry a social benefit, and therefore the courts issued a partial injunction, in order to balance the interests of the two parties. The legal system also uses principles of law, such as transferred malice (R v Latimer), the defences, causation, the coincidence of Actus Reus and Mens Rea (Fagan v MPC, R v Thabo Meli), the institution of duty of care and omission to act (R v Pittwood for example), and also the principle of oblique intention. Further to substantive law, the court also uses procedural justice, or formal justice. Formal justice looks at the mechanism by which decisions are made, goods and services allocated and so on. The positivists will look to the process by which law is made, and if this has been complied with no matter the content of the rules, they are to be obeyed and applied. ...read more.

It has been suggested that PACE has fought those miscarriages, yet the Prevention of Terrorism Act excludes many of the safeguards for suspects held under the Act. Michael Mansfield QC suggests that out accusatorial system should be replaced up to the point of trial with an inquisitorial system to ensure the investigation by the police was properly conducted and supervised by a Judge, as in France. Above all, the fundamental principle of the presumption of innocence and the right to silence should operate to ensure a fair trial. Failings will always occur, but an independent review body should rectify these. This independent review body is the Criminal Cases Review Commission. The CCRC is the independent public body set up to investigate possible miscarriages of justice in England, Wales and Northern Ireland. The Commission assesses whether convictions or sentences should be referred to a court of appeal. This body ensures that we maintain the aim of achieving justice by assessing any case brought to them to see whether a possible miscarriage of justice has occurred. In conclusion, the relationship between law and justice is not a perfect one, but it is much better than those in other countries. The legal system in England does still contain flaws, such as miscarriages of justice or perverse verdicts (R v Owen) but there are systems in place in order to ensure that any miscarriage of justice that does happen is rectified as soon as is possible, and also there are systems in order to prevent them happening in the first place. ?? ?? ?? ?? ...read more.