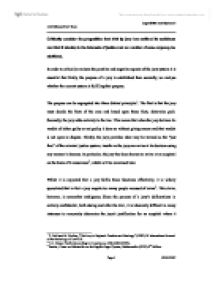 Critically consider the proposition that trial by jury has out lived its usefulness and that it should, in the interests of justice and as a matter of some urgency, be abolished.

Critically consider the proposition that trial by jury has outlived its usefulness and that it should, in the interests of justice and as a matter of some urgency, be abolished. In order to critically evaluate the positive and negative aspects of the jury system it is essential that firstly, the purpose of a jury is established then secondly, we analyse whether the current system is fulfilling that purpose. The purpose can be segregated into three distinct principles1. The first is that the jury must decide the facts of the case and based upon those facts, determine guilt. Secondly, the jury adds certainty to the law. This means that when the jury delivers its verdict of either guilty or not guilty, it does so without giving reason and that verdict is not open to dispute. Thirdly, the jury provides what may be termed as the "just face" of the criminal justice system, insofar as the jury can arrive at its decision using any manner it chooses. In particular, the jury has been known to arrive at an acquittal on the basis of it conscience2, which will be examined later. ...read more.

If there is true value in involving the public within the criminal process, the jury surely must be allowed to arrive at a decision that may be contrary to the law. This provides an influence of "community conscience" and in fact may be viewed as the jury exercising its constitutional role to arrive at a decision. Whether the juries' verdict may be described as "perverse" depends upon the perception of the role of the jury in the decision making process. If a narrow approach is taken, a verdict is proper if it is reached after an honest, careful and reasonable attempt to apply the law to the facts of the case, taking no other circumstances into account. This will no doubt provide a more certain and consistent outcome but will probably result in a greater number of guilty verdicts. A broader approach would consist of a verdict which has been reached after evaluation of the evidence, which indicated a guilty verdict, provided an acquittal based on a reasonable exercise of discretion in favour of the accused reflecting the jury's sympathy, clemency or disapproval of the prosecution. ...read more.

It could be recommended that the jury should be required to undertake a competency test in order to determine their suitability for jury service. This can be counteracted by the requirement to obtain a fair representation of society with a wide cross section of people. Dave Wilcox, an Engineer for the Environment Agency has recently undertaken jury service at Liverpool Crown Court. During his two weeks service he spent three days productive time on cases whilst the remainder was spent in the waiting area. He said "there were approximately three hundred people there at the time. It must have cost a fortune." Dave spen 1 P. Duff and M. Findlay, "The Jury in England: Practice and Ideology" (1982) 10 International Journal of the Sociology of Law 253. 2 T.A. Green, Verdict According to Conscience, 1200-1800 (1985). 3 Zander, Cases and Materials on the English Legal System, Butterworths (1993) 6th Edition. 4 "Jurors' Deliberations, Jury Service, Public Policy and the Law of Contempt" in Findlay and Duff (1988), pp. 62-65. 5 Fraud Trials Committee: Report; Chair: Lord Roskill (1986). Legal Skills and System 2 LLB (Hons) Part Time Page 1 09/05/2007 ...read more.