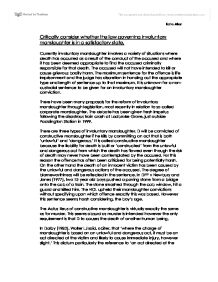 Critically consider whether the law governing involuntary manslaughter is in a satisfactory state.

The terms of the new offence in the 2000 document are that : * A person by his or her conduct causes the death of another. * He or she intended to or was reckless as to whether some injury was caused. * The conduct causing or intended to cause, the injury constitutes an offence. These conditions are concise and the law governing involuntary manslaughter is in a reasonable state, with there being clear boundaries where there is liability as in breaches of duty or gross negligence and where there is no relationship at all as concluded in R V Khan and Khan. There are clear and logical tests, such as the Church Test (1965) where it must be recognised that the danger of the action would have been recognised by a 'sober and reasonable person' that help judges reach satisfactory conclusions and direct juries correctly. The Government has stated that it is rational for a person 'to accept the consequences of his act, even if the final consequences are unforeseeable.' This is satisfactory as it would be ridiculous to allow people to escape the sentence of manslaughter just because they did not foresee the risk of death, as stated before ignorance is no defence. Thus the law governing involuntary manslaughter, in my critical opinion is in a satisfactory state. Kate Allen ...read more.