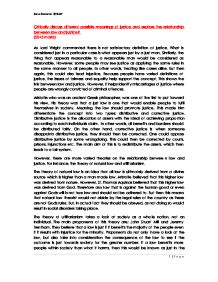 Critically discuss different possible meanings of justice and explore the relationship between law and justice? (30+5 marks) As Lord Wright commented there is not satisfactory definition of justice. What is considered just in a particular case is what appears just by a just man. Similarly, the thing that appears reasonable to a reasonable man would be considered as reasonable. However, some people may see justice as applying the same rules in the same manner to all people. In other words, treating like cases alike. But then again, this could also lead injustice. Because people have varied definitions of justice, the issues of fairness and equality help support the concept. This shows the link between law and justice. However, it helps identify miscarriages of justice where people are wrongly convicted of criminal offences. Aristotle who was an ancient Greek philosopher, was one of the first to put forward his view. His theory was that a just law is one that would enable people to fulfil themselves in society. Meaning the law should promote justice. This made him differentiate the concept into two types; distributive and corrective justice. Distributive justice is the allocation of assets with the ideal of achieving proportion according to each individuals claim. In other words, all benefits and burdens should be distributed fairly. On the other hand, corrective justice is when someone disappoints distributive justice, they should then be corrected. One could oppose distributive justice by some wrongdoing. ...read more.

For example, because of having the public's interest to consider, you would disregard a dangerous criminal their right to liberty. The second principle being that each individual should have equal opportunity as well as equal distribution. Rawls considers equality as in the distribution of wealth. Inequality is only allowed to help the mast disadvantaged. These principles could then be argued as it does not state what is meant by fair, as this could mean... it also does not describe or give a description as to what the basic rights and principles are of a human being. Could the basic right and principles be to have food and shelter on their plate, or would it be to have the freedom of speech etc. Nozick and the minimal state, is about how the state should have a minimum interference in people's lives, following a just society. The state should restrict to provide society with the basic needs like protecting one from theft or force. He felt that if ones property or wealth is legitimately and fairly obtained, then it is yours to keep. Property can be legitimately and fairly obtained in 3 ways; just acquisition like inheriting something legally, just transfer like purchasing something from another legally, and lastly just rectification following an unjust acquisition like returning stolen property to its rightful owner. ...read more.

Would this be considered as fair and just if she did not in actual fact steal the goods, or have any relation to it, except for the fact that she was handed over them the following day. Another example of sentencing within the summer riots is when a man was sent for imprisonment for 4 years for posting messages on Facebook encouraging the riots. Would this be considered as fair for the defendant, in other words would he gain anything from being sent to prison? The answer to this would be no, this is because if he had a community sentence, he would know a lot more about his community and therefore able to make a difference. As illustrated by Gilbert, the seriousness of the criminality must be matched with the seriousness of the penalty. Meaning, the type of crime they committed, the sentence should be equivalents and a penalty from which they can learn from their mistakes. To conclude this, as stated from the above, there are various definitions to justice; hence there is a problem of defining it. To gain perfect justice with any legal system is impossible. However, every legal system tries their utmost best to achieve justice for each individual. Aiming to treat them and achieve a 'fair' and 'just' solution. This showing that there is a relationship between the two; historically and theoretically. ?? ?? ?? ?? Sana Fazlanie 13HMW 1 | Page ...read more.

Summary:
This essay has followed the established pattern of considering theories of justice and then a general discussion of some cases. However the case discussion is about issues of substantive justice (which was not considered in the theoretical discussion) and the relationship between law and justice as set by the question has not really been explored.
Rating: *** (just)