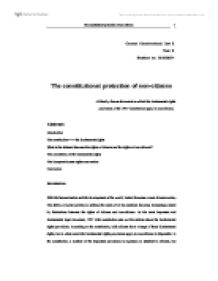 Critically discuss the extent to which the fundamental rights provisions of the 1937 Constitution apply to non-citizens.

To some degree, it is a global trend to make no deference on human rights protection between citizens and non-citizens. Although the denial of citizenship to children does not necessarily constitute a breach of the convention since a country is always free to discharge its international obligations without resorting to its constitutional framework, the legitimising negative attitudes towards foreigners will damage the common humanity and equal dignity. The present constitutional protection of non-citizens is far from certain. It is recommended that the Constitution be amended to explicitly guarantee the fundamental protection of non-citizens in the context of Irish immigration and asylum policy The non-citizens who legally resident in Ireland is a party of the society, as long as they contribute to the Irish economy and the diversity of the culture, they should be protected by the Irish law. The Irish constitution should give a clear expression to protect them. 1 1937 Irish Constitution http://www.taoiseach.gov.ie/upload/static/256.pdf 2 Article 40-44 1937 Irish Constitution 3 www.justice.ie work permit, refugee, visa etc. 4 http://www.oasis.gov.ie/moving_country/moving_to_ireland/right_to_vote.html 5 1972 IR 241 6 1973 IR 121 7 Citizenship and the International Remit of Constitutional Protection William Binchy 8 1966 IR 567 9 Citizenship and the International Remit of Constitutional Protection William Binchy 10 2001 3 IR 62 11 1937 Constitution 12 http://www.ireland.com/focus/referendum2004/ 13 Annu Rev Popul Law. 1989;16:168 14 http://www.ncbi.nlm.nih.gov/entrez/query.fcgi?cmd=Retrieve&db=PubMed&list_uids=12344201&dopt=Abstract 15 case C -200/2 http://curia.eu.int/jurisp/cgi-bin/form.pl?lang=en&Submit=Submit&docrequire=alldocs&numaff=&datefs=&datefe=&nomusuel=chen&domaine=&mots=&resmax=100 1 The constitutional protection of non-citizens ...read more.