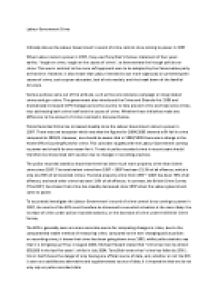 ﻿Labour Government Crime Critically discuss the Labour Government?s record of crime control since coming to power in 1997 When Labour came to power in 1997, they used Tony Blair?s famous statement of four years earlier, ?tough on crime, tough on the causes of crime?, to demonstrate their tough policies on crime. This was in contrast to the more soft approach seen to be adopted by the Conservative party at that time. However, it also meant that Labour intended to act more vigorously on preventing the causes of crime, such as poor education, lack of role models, and the break down of the familial structure. Various policies came out of this attitude, such as the zero-tolerance campaign on drug related crimes and gun crime. The government also introduced the Crime and Disorder Act 1998 and dramatically increased CCTV footage across the country to help prevent crime and help solve crimes, thus addressing both crime itself and the causes of crime. Whether these initiatives made any difference to the amount of crime recorded is discussed below. Police Recorded Crime has increased steadily since the Labour Government came to power in 1997. There was one exception which was that the figures for 2004/2005 showed a 6% fall in crime compared to 2003/4. However, one should be aware that in 1998/1999 there was a change in the Home Office Counting Rules for crime. This coincides roughly with the Labour Government coming to power and should be one reason for it. ...read more.

Transient populations are also excluded; the BCS is not organised using the electoral register, but on a process called PAF based on postal addresses; therefore the homeless are completely excluded, whilst those people who move a lot and do not stay at one address for very long are unlikely to get cover. Although there is not a large number of homeless people, they nevertheless have a phenomenally high victimisation rate, and that is therefore omitted. In addition, the sampling strategy employed with the BCS uses a constrained version of the PAF; addresses referring to institutional establishments, such as old peoples? homes, are excluded, as their crime experience was felt to be substantially different from other addresses. Consequently then, even a population frame that purports to cover the population of England and Wales will by necessity miss some sections of that population. The most recent BCS response rate was 75%; this is extraordinarily good by survey standards, but nevertheless 25% of people that the BCS has tried to contact are excluded; this does not matter if the people missing have exactly the same characteristics as the 75% who have been contracted, but it is very unlikely that the non-respondents have the same characteristics as the respondents. Aye Maung, writing in 1995, showed that there are disproportionate numbers of non-respondents in inner-city areas, and in properties judged by interviewer to be in poor condition, which are areas with high crime rates, and thus the question of whether the sample is representative or not has to be questioned. ...read more.

However, the increase in less serious crime is probably artefactual because of the change in recording crimes that was introduced. The violence debate, as to whether violent crime has really been going up or whether it merely appears to be because of recording practices, is particularly important, given the level of excitement that the media undergo because of the apparent rise in violent crime. The BCS is not particularly reliable in relation to violence, because a lot of violent crimes are because of domestic violence, and interviewees for the BCS would be reluctant to talk about domestic violence in the context of a household interview, especially if the offender is in the next room of the house. It is also interesting to look at public perceptions of trends in crime, and as to whether it is going up or down. According to BCS figures, in 2004, 5.61% of respondents thought that crime had increased in the previous year under the Labour Government nationally, and 27% thought that it had increased ?a lot?. Also in 2004, 5.42% of respondents thought that crime had increased because of the Labour Government locally, and 16% thought that it had increased ?a lot?. In conclusion, it can be seen that under the Labour Government since 1997, crime seems to have decreased by using the more reliable BCS figures. However, the public perception is that crime has gone up a lot, and one must question why this is, and whether the Labour government are trying to create this impression in order to support their position of being ?tough on crime? ...read more.