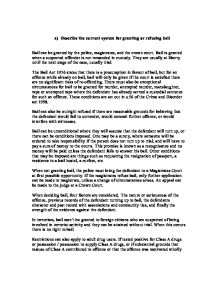 a) Describe the current system for granting or refusing bail Bail can be granted by the police, magistrates, and the crown court. Bail is granted when a suspected offender is not remanded in custody. They are usually at liberty until the next stage of the case, usually trial. The Bail Act 1976 states that there is a presumption in favour of bail, but for an offence while already on bail, bail will only be given if the court is satisfied there are no significant risks of re-offending. There must also be exceptional circumstances for bail to be granted for murder, attempted murder, manslaughter, r**e or attempted r**e where the defendant has already served a custodial sentence for such an offence. These conditions are set out in s.56 of the Crime and Disorder act 1998. Bail can also be outright refused if there are reasonable grounds for believing that the defendant would fail to surrender, would commit further offence, or would interfere with witnesses. Bail can be unconditional where they will assume that the defendant will turn up, or there can be conditions imposed. ...read more.

When this occurs there is no right to bail. Restrictions can also apply to adult drug users. If tested positive for Class A drugs or possession / possession to supply Class A drugs, or if substantial grounds that misuse of Class A contributed to offence or that the offence was motivated wholly or partly due to intended misuse of drug. There can also be restricted bail if the defendant has refused to agree to participate in an assessment or follow-up in relation to his dependency upon or propensity to misuse Class A drugs. b) Discuss whether the criteria used by the police or the courts in deciding whether or not to grant bail for a serious offence is satisfactory When granting bail, it is important to balance the conflicting interests between statutory presumption and the need to protect the public. This is to say that it is important to note that the defendant is presumed innocent at this stage and entitled to his liberty, against the public interest to be protected from potentially dangerous criminals. ...read more.

However, it is argued that too many people are refused bail. Recent statistics indicate that 20% of those in prison and people who have not even been tried yet. If more decisions are made to remand, then more people are kept in custody who may not have abused their bail, which leads to more people losing their liberty and their jobs and home lives, which will continue to aid against prison overpopulation, even with offenders who have not been charged yet. Nevertheless, this can also be argued that in 1998 statistics show that 20% of defendants on bail commit at least one further offence and it is safer to have prisons being populated rather than potentially very dangerous criminals being let free until trial amongst society. The Criminal Justice and Public Order Act 1994 states that the presumption in favour of granting bail is removed when a person is charged with an offence (that can be tried in the Crown Court) while on bail for another offence. This is an attempt to keep a balance between the suspected criminals civil rights and the protection of the public. ?? ?? ?? ?? ...read more.