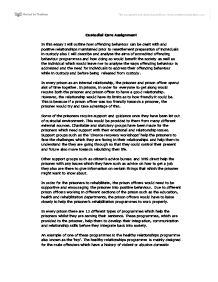 Another example is the 'one-to-one programme'. This programme, with the use of some psychological and social methods, helps the offenders to change their thoughts, attitudes and standards that contribute to offending behaviour in the future. These types of programmes which help the development of positive relationships benefit both the society as well as the individual. The way that the programmes benefit the society is that the programmes help offenders to not reoffend once they have been let back into the society. There are many reasons such as poor thinking and the problem solving skills, which lead to offenders reoffending. Some people tend to reoffend because they can't find any work. The reason for this is because they have criminal records which make it hard for them to find a job. However there are programmes which help the offender in that category of how to be successful in finding a job outside prison. Some of the prisoners get their sentence cut short as a deal. The deal usually works both ways as it benefits the society as well as the prisoner. ...read more.

They could also see what they could have done instead of committing the crime to solve their issue. However the bad affect that this could leave on the prisoner is that it could make the prisoner go through stress and depression when thinking about the past. Another positive thing about addressing the offending behaviour is that the prisoners can use the rehabilitation programmes as a new start to life and could start thinking ways they could improve their future such as employment, education or basic relationships with their family members. Also their behaviour once they have been through certain programmes would be different from when they first entered the prison, typically in a positive manor. This would help the prisoner to bond with others. However sometimes when a prisoner thinks that they don't need to be rehabilitated and gets offered the service, they would feel that the prison officers are being unfair to them and treating them badly. This could cause conflict with the prisoner and the prison office or at worst cause conflict within the programme group. Also many tax payers and victims of crime believe that tax money could be spent for a better cause then help rehabilitate the prisoners. ...read more.