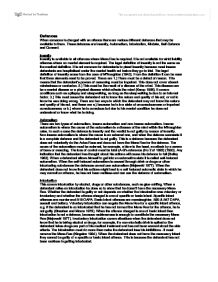 Defences When someone is charged with an offence there are various different defences that may be available to them. These defences are Insanity, Automatism, Intoxication, Mistake, Self-Defence and Consent. Insanity Insanity is available to all offences where Mens Rea is required. It is not available for strict liability offences where no mental element is required. The legal definition of insanity is not the same as the medical definition. It is not common for defendants to plead insanity because most insane defendants are hospitalised under the mental health act before they go to trial. The legal definition of insanity arose from the case of M'Naughten (1843). From the definition it can be seen that three elements need to be proved. These are 1.) There must be a defect of reason. This means that the defendant's powers of reasoning must be impaired. This does not cover absent-mindedness or confusion. 2.) This must be the result of a disease of the mind. This disease can be a mental disease or a physical disease which affects the mind (Kemp 1956). ...read more.

When the defendant does not know that his actions might lead to a self induced automatic state in which he may commit an offence, he has not been reckless and can use the defence of automatism. Intoxication This covers intoxication by alcohol, drugs or other substances, such as glue-sniffing. When a defendant relies on intoxication he does so to show that he doesn't have the necessary Mens Rea. Whether the defendant is guilty or not depends on whether the intoxication was voluntary or involuntary and whether the offence charged is one of specific or basic intent. Specific intent offences are murder and S18 OAPA. Basic intent offences are manslaughter, S20 & S47 OAPA, assault and battery. Voluntary intoxication can negate the Mens Rea for a specific intent offence, e.g. if the defendant is so intoxicated that he has not formed the Mens Rea for the offence, he is not guilty (Sheehan and Moore 1975). When the offence charged is one of basic intent then intoxication is not a defence, because recklessness is enough to constitute the necessary Mens Rea (Majewski 1977). ...read more.

Was the defendant under actual or threatened attack from the victim? 2.) Did the defendant act only to defend himself from the victim? 3.) Was his response in proportion to the degree of danger?. Section 3(1) of the Criminal Justice Act 1967 states that "a person may use such force as is reasonable in the circumstances in the prevention of crime". If force is used after all danger from the assailant is over then the defence of self-defence is not available, and if excessive force is used the defence will fail (Clegg 1995). Consent Consent is available as a defence for assaults where there is no injury or only a minor injury. It is never available for S18 & 20 OAPA, and is sometimes not available for S47 OAPA. This is because it is not seen to be in the public interest that people should try to cause, or should cause, each other ABH for no good reason. The Court of Appeal listed certain situations in which the consent of the victim is legally relevant and renders the conduct in question lawful, for example, surgical interference, sporting activity, tattooing & piercing. ...read more.