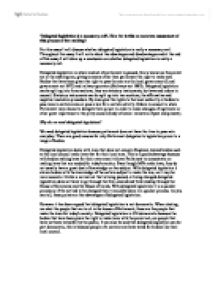 'Delegated legislation is a necessary evil'. How far is this an accurate assessment of this process of law making?

A negative resolution could be passed in which case the statutory instrument becomes void. The second procedure is the affirmative resolution; this is used by Parliament when power given in the parent act is controversial. If this is the case then Parliament may state in the act that the affirmative procedure must be used. The statutory instrument will become effective only if one or both houses pass an affirmative resolution. Thousands of statutory instruments are passed every year. The scrutiny committee, which has members from the House of Lords and House of Commons, looks at these instruments in detail. And draws the attention of parliament if any of the statutory instrument; imposes tax on the public, if the act is designed to be effective retrospectively, if the act is outside the power of the parent act or it is poorly drafted. Parliament has the right to withdraw delegated power from local authorities or bodies. The courts also have power over delegated legislation. If an individual is affected by a delegated legislation. ...read more.