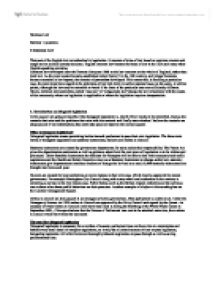 Business Law Seminar 1 questions 1 Common Law That part of the English law not embodied in legislation. It consists of rules of law based on common custom and usage and on judicial (court) decisions. English common law became the basis of law in the USA and many other English-speaking countries. Common law developed after the Norman Conquest 1066 as the law common to the whole of England, rather than local law. As the court system became established under Henry II in the 12th century, and judges' decisions became recorded in law reports, the doctrine of precedent developed. This means that, in deciding a particular case, the court must have regard to the principles of law laid down in earlier reported cases on the same, or similar points, although the law may be extended or varied if the facts of the particular case are sufficiently different. Hence, common law (sometimes called 'case law' or 'judge-made law') keeps the law in harmony with the needs of the community where no legislation is applicable or where the legislation requires interpretation. 2. Introduction on delegated legislation In this essay I am going to describe what delegated legislation is, clarify why it needs to be controlled, discuss the controls that exist and the problems that exist with the controls and finally state whether I believe the controls are adequate and if not reformations that could take place to improve the current system. What is delegated legislation? Delegated legislation means permitting bodies beneath parliament to pass their own legislation. The three main forms of delegated legislation are statutory instruments, by-laws and orders in Council. Statutory instruments are created by government departments for areas under their responsibility. ...read more.

Flexibility Delegated legislation is more flexible than an Act of Parliament. It is far simpler to amend a piece of delegated legislation than to amend an Act of Parliament. ADVANTAGES DISADVANTAGES Used because: * Saves limited time in Parliament; * Allow rapid change; * MPs lack detailed or technical knowledge. E.g. Specific details in Abortion Act, Road Traffic detail * Quick response to new developments, e.g. Foot and Mouth outbreaks. The Prevention of Terrorism (Temporary Provisions) Act allows the quick addition of new prohibited groups. * Enables minor changes to statutes, e.g. Variations in sentences, approval of motor vehicle changes. * Judicial review may be sought, by parties with locus standi, (i.e. Persons sufficiently affected by the legislation), so time is not wasted by Parliament considering them all. * Model bylaws available from Whitehall. * Withdrawal or amendment easy. Using delegated Legislation * implies that Parliament has insufficient time to scrutinise it. Parliament is not reviewing legislation properly. * Sub-delegation of powers a further problem (although not for EU statutory instruments), which causes complexity and confusion. * Sheer volume causes complexity - it is impossible for anyone to keep abreast of all delegated legislation. * Lack of publicity, not known about by the public (and often lawyers). * It is undemocratic as most regulations are made by civil servant or other unelected people, except for local authority bylaws made by elected councillors * Henry VIII clauses can give power to delegated legislation or amend or repeal Acts of Parliament Lord Hewart describes delegated legislation as "The New Despotism" "Whether good or bad", delegated legislation is inevitable (The Committee on Minister's Powers (1932)) One member said that it was "a necessary evil, inevitable, ... But nevertheless a tendency to be watched with misgiving." ...read more.