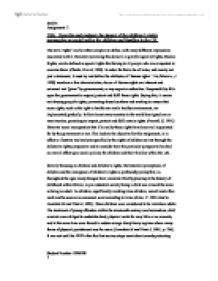 Describe and evaluate the impact of the children's rights perspective on social policy for children and families in the UK.

Title: Describe and evaluate the impact of the children's rights perspective on social policy for children and families in the UK. The term 'rights' can be rather complex to define, with many different expressions associated with it. However narrowing this down to a specific aspect of rights; Human Rights, can be defined as special rights that belong to all people who are competent to exercise them. (Clarke, K et al, 1996). In order for this to be of value, and merely not just a statement, it must try and define the attributes of 'human rights'. As (Morrow, J. 1998) mentions a few characteristics, above all Human rights are inherent and universal not "given" by governments, or any superior authorities. Responsibility falls upon the government to respect, protect and fulfil these rights. Saying this, it means not abusing people's rights, preventing abuse by others and working to ensure that some rights, such as the right to health care and a healthy environment, are implemented gradually. In fact almost every country in the world has signed one or more treaties, promising to respect, protect and fulfil certain rights (Pascall, G, 1997). However some may question that if in reality these rights have been well acquainted for by the government or not. This leads to the objective for this assignment, is in effect to illustrate and evaluate specifically the rights of children set out through the children's rights perspective and to consider how this particular perspective has had an overall effect upon social policies for children and their families within the UK. Initially focusing on children and children's rights, the historical perceptions of children and the emergence of children's rights is profoundly perceptible, as throughout the ages many changes have occurred. Briefly glancing at the history of childhood within Britain, in pre-industrial society being a child was viewed the same as being an adult. As children, significantly working class children, would most often work and be seen as an economic asset according to Aries (Aries, P. ...read more.

(Children Act 1989 (c.41). Considering that the children Act 1989, starts of with the paramount of importance of the child, and being named 'Children Act' but then tends to give equal weight of importance to each of the four perspectives to work along side each other. Looking at the Children Act 1989 optimistically, the act overall aids the child and family, as it illustrate the need to, where possible, avoid placing care orders and prosecution of children (Abbott,P and Wallace,C, 1992), as this would therefore avoid breaking up the family unit. According to (Pascall, G, 1997), as positive results of the Children Act 1989 demonstrate that fewer children are being looked after outside the home by local authorities. There is also a reduction in emergency protection orders which are in replacement of 'place of safety' orders and care orders whereby parents are, with the local authorities, held responsible. (Pascall, G, 1997). Whereby social workers previously were shown to, on occasion, to use place of safety orders where it was not necessary Social workers tend to show positive changes in attitudes and approach in their work, as a direct consequence of the Children Act 1989 providing a more structured legal framework. (Pascall, G, 1997). Hence the security of specific guidelines to follow or as a result of working in partnership with the parents, in the position of offering assistance and support in an attempt to keep families together, wherever possible. (Pascall, G, 1997). Similar to the Children Act 1989, another policy that has had great impact on a world wide scale, is the UN Convention on the Rights of the Child of 1989. The UN convention visions a child (under age 18) as an individual and as a member of a family and a community, with rights and responsibilities appropriate to his or her age and stage of development. (Volpe, 1997) The UN Convention on the Rights of the Child is based on the philosophy that children are equal to and have the same value ...read more.

All over Europe there are active children's rights ministers and offices, for instance Norway, which was the first country to appoint an ombudsman for children, and this was over 20 years ago. (Dobson, A. 2001). Trond Waage, Norway's Commissioner stated "We have enormous freedom to represent children and we aim to be proactive and lead the way in Norway where children's issues are concerned. But what is vital is that there is freedom to act independently on behalf of children. Without us, children's interests may be forgotten," (Dobson, A. 2001). Other countries such as Iceland and Austria also have children's commissioners. It seems that the UK has a large amount of catching up to do when concerning children's rights. In a positive light, it can be concluded that it is clear to state by looking into the history of childhood and children's rights, throughout the ages, the welfare of children and their families has immensely been improved. This can be due to the implementation of the children's rights movement on a worldwide basis. And from the input of certain Acts and social policies, such as Children Act 1989 and UN Convention of The Rights of a child 1989. However, within the UK, brining into attention that the acts are in place in writing but unfortunately not quite so in practice. The dominant ideology of childhood portrays it as a 'walled garden', (Lavalette M and Pratt A, 2001), fully protected, where no harm can afflict or hurt the phase of childhood. This assignment has showen that this perfect worriless place does not exist in reality, especially not in the UK, as the governments in the past and present have demonstrated this through the lack of input in the: juvenile justice, education, poverty, unequal opportunities of children and their families and overall on the issue of children's rights. Although it can be acknowledged, things have improved with time, but there are clear signs that more work needs to be done for a brighter prosperous outlook for the future of children's rights within the UK. Word count: 3,289. ...read more.