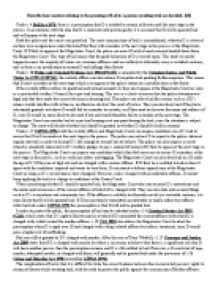 Describe how matters relating to the granting of bail to a person awaiting trial are decided. [18 marks]

﻿Describe how matters relating to the granting of bail to a person awaiting trial are decided. [18] Under s.4 Bail Act 1976, there is a presumption that D is entitled to remain at liberty until the next stage in the process. In accordance with the idea that D is innocent until proven guilty, it is assumed that D will be granted bail and will appear at the next stage. Both the police and the courts can grant bail. The most common type of bail is unconditional, whereby D is released on their own recognisance under the belief that they will surrender at the next stage in the process at the Magistrates Court. If D fails to appear at the Magistrates Court, the police can arrest D with a bench warrant handed down from the Magistrates Court. This type of bail means that the good behaviour of D is trusted upon. This tends to mostly happen because the majority of crimes are summary offences and are unlikely to ultimately carry a custodial sentence, and so there is no justification to remand D and infringe their liberty. ...read more.

The Magistrates Court can consider bail at a pre-trial hearing or at any point during the trial, since the situation is subject to change. The court will decide whether bail should be granted or whether D should be held in remand. Under s.27 CJPOA 1994, both the custody officer and Magistrates Court can impose conditions on a D?s bail to ensure that D will surrender at the next stage in the process. The police can instruct D to report to the police station at regular intervals in order to disrupt D?s life enough to remind him to behave. The police can also impose a surety whereby somebody interested in D?s welfare pledges to pay x amount of money if D fails to appear at the next stage in the process. The Magistrates Court can impose any conditions which they feel necessary to ensure D surrenders at the next stage in the process, such as exclusion orders and tagging. The Magistrates Court can also deny bail to a D under the age of 17 if they are at high risk and are charged with a serious offence. ...read more.

s.19 CJA 2003 also allows the Magistrates Court to rebut the presumption where D is aged over 18 and charged with a drugs related offence but refuses treatment, since D would pose a higher risk of reoffending. Bail can still be granted to D?s charged with murder. After the case of Gary Weddell, s.115 Coroners and Justice Act 2009 states that if D is charged with murder but there is no reason to believe that there is a significant risk that D will harm another person, then the presumption remains and D is still entitled to bail. However, a D convicted of rape, murder, attempted murder, or charged with them, will generally not be granted bail under the provisions of s.56 Crime and Disorder Act 1998 (amending CJPOA 1994). The complication of bail is that it is difficult to strike the correct balance between the un-convicted person?s rights to remain at liberty whilst awaiting trial, with the need to protect the public against the commission of further offences. ...read more.