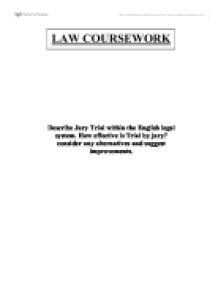 Describe Jury Trial within the English legal system. How effective is Trial by jury? consider any alternatives and suggest improvements.

Describe Jury Trial within the English legal system. How effective is Trial by jury? consider any alternatives and suggest improvements. Part 1- Describe Jury Trial within the English Legal system A Trial by Jury is one of the oldest traditions, and is seen as a cornerstone in the English Legal System as it developed from the Anglo-Saxon judicial custom. In the English legal system it is seem as such a major feature because it allows people to be judged by their peers rather than by judges whom the majority of people consider to be middle class and middle minded. Opportunities for bias are also eliminated as it has been proven to be a system that works well and that is respected by the majority of people in society. Surprisingly England stands almost alone in the fact that it uses juries apart from France who are the only other country in Europe that use juries. Still in France juries are only used in the most serious of cases. ...read more.

and the acquittal of those who are innocent having regard to the efficient use of resources, and in particular to consider whether changes are needed in 1. The conduct of police investigations 2. The role of the prosecutor 3. The role of experts 4. The arrangements for the defence 5. The opportunities for an accused person to state his position 6. The power of the courts in directing proceedings 7. The role of the court of appeal 8. The arrangements for considering and investigating miscarriages of justice. Jurors can be used in the Crown Court for indictable offences or triable either way offences. In a County Court the jury must consist of eight people and in a Coroner's Court there are between eight and eleven jurors are used in suspicious death cases whereas usually a jury consists of twelve people. In civil cases taking place in the High Court juries are used for the following types of cases; libel, fraud, malicious prosecution and also false imprisonment cases. The jurors also decide on the verdict and award the claimant the appropriate damages. ...read more.

Juries decide whether the defendant is guilty or innocent on the evidence that has been put forward to them by the prosecution and the defence. They must come to one of two verdicts: unanimous - all members of the jury agree on the same verdict or a majority. This can be a 11:1 or 10:2 decision. If this is not the outcome of the trial the trial a retrial will take place or the trial will be dismissed. However in the most serious of trials e.g. murder, a unanimous decision must be reached. No one is allowed to question the jurors about these deliberations. If a person is found of contempt of court they can be fined or even sent to prison. When the jury has reached an acceptable verdict they return to court and are asked by the clerk what verdict they have reached. Then the foreman of the jury must state whether the defendant is guilty or not guilty and how many jurors agreed on the verdict. This is then the end of the juries' service and they are then obliged to leave the court. Part 2- Consider any alternatives and suggest improvements ...read more.