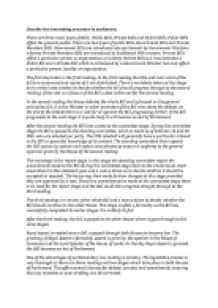 ﻿Describe the law making procedure in parliament. There are three main types of Bills: Public Bills, Private Bills and Hybrid Bills. Public Bills affect the general public. There are two types of public Bills: Government Bills and Private Members Bills. Government Bills are introduced into parliament by Government Ministers whereas Private Members Bills are introduced by backbench MPs or peers. Private Bills affect a particular person or organisation or locality. Hybrid Bills is a cross between a Public Bill and a Private Bill which is introduced by a Government Minister but only affect a particular person, locality or organisation. The first step taken is the first reading. In the first reading the title and main aims of the bill are announced and copies of it are distributed. There is no debate taken at this stage but a verbal vote is taken to decide whether the bill should progress through to the second reading. If the vote is in favour of the Bill a date is then set for the second reading. In the second reading the House debates the whole Bill and is focused on the general principles of it. ...read more.

The house may then make further changes at this stage provided they are approved by a vote. Should no amendments be made at the committee stage there is no need for the report stage and the Bill could then progress straight through to the third reading. The third reading is a review of the whole Bill and a vote is taken to decide whether the Bill should continue to the other House. This stage is often a formality as the Bill has successfully completed its earlier stages it is unlikely to fail. After the third reading, the Bill is passed to the other House where it goes through to the same stages. Royal Assent is needed once a Bill is passed through both Houses to become law. The granting of Royal Assent is formality. Assent is given by the speaker in the House of Commons and the Lord Speaker of the House of Lords. On the day Royal Assent is granted, the Bill becomes an Act of Parliament. One of the advantages of parliamentary law making is scrutiny. ...read more.

A disadvantage of parliamentary law making is that it is undemocratic as neither the Queen nor the House of Lords are elected, thus, the unelected House of Lords should not have the power to delay Bills that have been approved by the democratically elected House of Commons. Another disadvantage is Government control as the Government has a majority of MPs in the House of Commons; it can vote out any private members Bills that does not fit its political agenda. The Government is too powerful as it is able to by pass the House of Lords views via Parliament Act. The process is slow as a Bill has to go through many readings and stages as is not appropriate when important laws need to be made quickly. Although the Royal Assent has become a formality this is somewhat a futile stage and makes the whole legislative process more time consuming. When drafting a Bill, parliamentary draftsmen use words and phrases that are confusing, unclear and over elaborate. 75% of cases in the House of Lords involve issues over interpretation of Acts of Parliament. Language and structural issues also make the law inaccessible for ordinary people. ...read more.