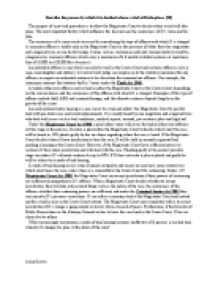 Describe the process by which it is decided where a trial will take place. [18 marks]

ï»¿Describe the process by which it is decided where a trial will take place. [18] The purpose of a pre-trial procedure is to allow the Magistrates Court to decide where a trial will take place. The most important factors which influence this decision are the seriousness of D’s crime and his plea. The seriousness of a crime can be assessed by considering the type of offence with which D is charged. A summary offence is triable only in the Magistrates Court in the presence of either three lay magistrates and a legal advisor, or one district judge. Crimes such as common assault and common battery would be categorised as summary offences which carry a maximum of a 6 month custodial sentence or maximum fine of £5,000 (or £20,000 for a business). An indictable offence is one which can only be tried in the Crown Court and includes offences such as rape, manslaughter and robbery. A Crown Court judge can impose up to the statutory maximum for any offence, or impose an unlimited sentence at his discretion for common law offences. For example, the maximum sentence for statutory theft is 7 years under the Theft Act 1968. ...read more.

When a Magistrates Court decides whether to accept jurisdiction, they will take into account things such as the nature of the case, the seriousness of the offence, whether their sentencing powers are sufficient, and under the Criminal Justice Act 2003 they can consider D’s previous convictions. D can refuse a summary trial at the Magistrates Court and instead opt for a trial by jury in the Crown Court instead. The Magistrates Court may completely refuse to accept jurisdiction if D’s charge is gang related or derives from a breach of peace. Furthermore, if the Director of Public Prosecutions or the Attorney General wishes to have the case tried in the Crown Court, D has no choice but to adhere. Whilst increasingly uncommon, a mode of trial hearing becomes ineffective if D pursues a cracked trial, whereby D changes his plea ‘at the doors of the court’ Tim has been charged with criminal damage to the value of £10,000 at a children’s playground. Discuss what Tim would want to consider in deciding which court his case will be heard in. [12] Tim potentially has a choice of which court he wants his case to be heard at because criminal damage is a triable either way offence. ...read more.

In a Magistrates Court there would be either 3 lay magistrates and a legal advisor, or one district judge. In comparison, in the Crown Court there is much better legal representation since a fully qualified judge decides all matters of law, interpretation and what would be Tim?s ultimate sentence. In a jury there are 12 lay people who decide on matters of fact and so this could work in Tim?s favour as they may argue his case better than in the Magistrates Court. However, this can be expensive (if Tim is convicted he may have to pay part of the cost of his trial) and time consuming (some Crown Court trials can take up to 18 months), and it could also lead to a more severe sentence. This is because the Crown Court have unlimited powers unless there is a maximum in the statute, which would be 10 years in Tim?s case for criminal damage. To conclude, Tim should opt for the Magistrates Court to hear his case over the Crown Court because whilst he has less legal representation and is more likely to be convicted, the Magistrates Court powers would give him a much more lenient sentence for the nature of his crime in comparison to what the Crown Court could sentence him to. Sasha Groves ...read more.