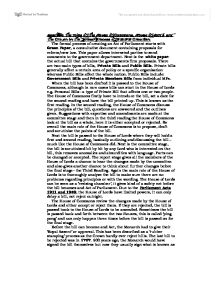 Describe the role of the House of Commons, The House of Lords and The Crown in statute creation. Including Advantages and disadvantages.

Describe the roles of the House of Commons, House of Lords and the Crown in the formal process of Statute Creation. The formal process of creating an Act of Parliament starts with Green Paper, a consultative document containing proposals for reform/new law. This paper allows interested parties to send comments to the government department. Next is the white paper: the actual bill that contains the governments firm proposals. There are two main types of bills, Private Bills and Public Bills. Private bills generally affect a certain area of policy or a specific organisation whereas Public Bills affect the whole nation. Public Bills include: Government Bills and Private Members Bills from individual MPs. When the bill has been drafted it is passed to the House of Commons, although in rare cases bills can start in the House of Lords e.g. Personal Bills- a type of Private Bill that affects one or two people. ...read more.

Due to the Parliament Acts 1911 and 1949, the House of Lords have limited powers, it can only delay a bill, not reject outright. The House of Commons review the changes made by the House of Lords and either accept or reject them. If they are rejected, the bill is passed back to the House of Lords to be amended. Sometimes the bill is passed back and forth between the two Houses, this is called 'ping pong' and can only happen three times before the bill is passed on for the final stage. Before the bill can become and Act, the Monarch had to give their 'Royal Assent' or approval. This has been described as a 'rubber stamping' process as the Crown hardly ever reject bills. The last bill to be rejected was in 1707. 500 years ago, the Monarch would have signed the bill themselves but now they usually sign what is known as Letters Patent which allow the speakers of the two Houses to announce that Royal assent has been given. ...read more.

On the other hand, as of the Constitutional Reform Act 2005, the House of Lords abolished hereditary peers and life peers are elected for specific reasons e.g. for special qualities/ experience/ skills and/or knowledge. Therefore the people in the House of Lords bring certain qualities to statute creation. Also one major advantage to this system is that the House of Commons is an elected body, MPs chosen by members of the general public for things they have promised. In my eyes this advantage outweighs the disadvantages. The system has worked for many, many years and our elected MPs make the country a democracy, giving us a say in what goes on and how the country should be run. Although the process is very slow, it is giving time to make sure no obscure Law is passed and to make sure the Law will work and be understood, limiting the need for interpretation by covering all aspects of the topic removing ambiguity. ...read more.