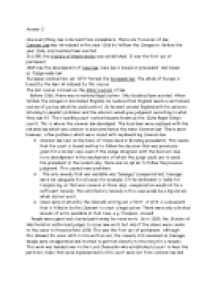 Describe the sources of law in the UK

﻿Answer 2 Like everything, law is derived from somewhere. There are 5 sources of law. Common Law was introduced in the year 1066 by William the Conqueror. Before the year 1066, only localised laws existed. In 1285, the statute of Westminster was established. It was the first act of parliament. 1865 saw the development of Case law. Case law is based on ?precedent? and known as ?Judge made law?. ?European communities act 1972? formed the European law. The whole of Europe is bound by the laws introduced by this source. The last source is known as the Minor sources of law. Before 1066, there was no national legal system. Only localised laws existed. When William the Conqueror dominated England, he realised that England needs a centralised system of justice which he could control. So he went around England with his advisors listening to people?s problems and the advisors would give judgment according to what they saw fit. This travelling court system became known as the ?Curia Regis? (King?s court). This is where the common law developed. The local laws were replaced with the national law which was common to everyone hence the name ?Common law?. There were however, a few problems which were raised with implementing Common law. 1. ...read more.

Thus, these rules became known as ?Equity?. Statute Law is written down by the Members of Parliament. Statutes begin as ?bills?. It begins with a draft form. Bills may begin as a consultation paper, sometimes called a ?White Paper?; or a? Green Paper?. This is a document that contains the proposals for the legislative change. A Bill must be looked by the ?House of Commons? and the ?House of Lords? and must be given the Royal Assent by the monarch. This is when the Bill will become an ?Act? and comes into force the date the Royal Assent is granted, unless the Act is set to come into force at a later date. The process the Bills go though is: Report Stage Committee Stage Second Reading First Reading Royal Assent Consideration of Amendments Third Reading This process goes through the House of Commons? and the ?House of Lords? apart from the last two stages. Those two stages will happen after both of the houses have debated and voted upon the Bill. Bills may start in either house apart from the Bills dealing with financial matters which start in the House of Commons. Parliament also has the authority to ?delegate? the task of making laws to someone else (delegated legislation) e.g. ...read more.

This treaty also created a new body ? the European Union (EU). The EU included the EC. All the laws that originate from the EC and the EU shall be referred to as the ?EU law?. this is due to EC not existing anymore. Treaties on a whole do not affect domestic law; but the law of the EU is different because these laws are transferred into UK domestic law by a statute ? the European Communities Act 1972. So this statute means that the UK must give effect to any laws passed by the EU. There are a few Minor sources like ?Canon law? (Church laws), ?Custom? (aspects of Land law) and ?Roman law? (Shipping laws). These laws are the little aspects of laws that have been around for a long time. A lot of present laws are developed from these minor sources. All these sources contributed towards the development of the English Law to what it is today. From the five sources, three are still active today. They are known as the ?Active sources? of law. Statute, Case Law and European Law are all active and commonly used around the states. Minor sources and Common Law, both are ?Inactive source?, although Case law developed from Common law. ...read more.

Summary:
Although there is no title given, the essay is a generally accurate description of the sources of law of England and Wales. it could have been improved with some specific examples of the various forms of law. Rating: ***