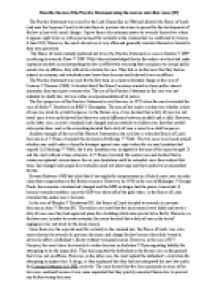 Describe the use of the Practice Statement using the sources and other cases. [15 marks]

﻿Describe the use of the Practice Statement using the sources and other cases. [15] The Practice Statement was issued by the Lord Chancellor in 1966 and allowed the House of Lords (and now the Supreme Court) to deviate from its previous decisions to permit for the development of the law in line with social changes. It gave them a discretionary power to overrule themselves where it appears right to do so, with especial need for certainty in the criminal law (as confirmed by Source A lines 8-9). However, the courts do not use it very often and generally consider themselves bound to their own precedent. The House of Lords initially preferred not to use the Practice Statement, as seen in Knuller V DPP in refusing to overrule Shaw V DPP. Whilst they acknowledged that in the earlier case they had made a genuine mistake in misinterpreting the law in effectively assuming that conspiracy to corrupt public morals was an offence, they refused to overrule the case. They did so on the basis that they had an interest in certainty, and everybody now knew their decision and believed it was an offence. ...read more.

However, by 1976 in the case of Miliangos V George Frank, the economic situation had changed and the GBP no longer had the power it once had. It became virtually worthless since the GBP was taken off of the gold value, so the House of Lords overruled the earlier case?s decision. In the case of Murphy V Brentwood DC, the House of Lords decided to overrule its previous decision in Anns V Merton BC. The earlier case ruled that the local council were liable and owed a duty of care since they had approved plans for a building which later proved to be faulty. However, in the later case, in order to create certainty, the courts decided that a duty of care in the tort of negligence was not owed by the local council. Since there was the especial need for certainty in the criminal law, the House of Lords was even more reluctant to overrule its previous decisions and change the law because they didn?t want to adversely affect a defendant?s liberty without very good reason. However, in the case of R V Shivpuri, the court chose to overrule its earlier decision in Anderton V Ryan regarding liability for attempting to do the impossible. ...read more.

There are however some restrictions on the use of the Practice statement and occasions when the House of Lords will refuse to overrule their previous decisions even if it leads to injustice. The House of Lords will not become involved with issues relating to national security or issues that are too important, as seen in C V DPP (1995) regarding the age of criminal responsibility. In this case they wanted to reduce the age to ten instead of using the principle of doli incapax, and even though the House of Lords acknowledged that this was correct, they felt it was too important a decision for them to change and so left it for parliament to deal with. In summary, the House of Lords (now the Supreme Court), will use the Practice Statement to correct their own decisions and to update and develop the law to reflect the changing social and economic status. However, they are still reluctant to use it and the power remains discretionary, having only used it ten times since 1968. The Supreme Court has been in effect since 2009 and they are yet to utilise the Practice Statement. It appears that they would rather distinguish on the basis of the material facts being sufficiently different. ...read more.