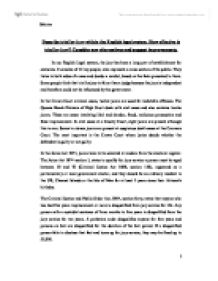 Describe trial by jury within the English legal system. How effective is trial by jury? Consider any alternatives and suggest improvements.

Describe trial by jury within the English legal system. How effective is trial by jury? Consider any alternatives and suggest improvements. In our English Legal system, the jury has been a long part of establishment for centuries. It consists of 12 lay people, who represent a cross section of the public. They listen to both sides of a case and decide a verdict, based on the facts presented to them. Some people think that trial by jury is fairer than a judge because the jury is independent and therefore could not be influenced by the government. In the Crown Court criminal cases, twelve jurors are used for indictable offences. The Queens Bench Division of High Court deals with civil cases and also contains twelve jurors. These are cases involving libel and slander, fraud, malicious prosecution and false imprisonment. In civil cases at a County Court, eight jurors are present although this is rare. Seven to eleven jurors are present at suspicious death cases at the Coroners Court. The most important is the Crown Court where juries decide whether the defendant is guilty or not guilty. In the Juries Act 1974, jurors have to be selected at random from the electoral register. The Juries Act 1974 section 1, states to qualify for jury service a person must be aged between 18 and 70 (Criminal Justice Act 1988, section 119), registered as a ...read more.

If they cannot reach a unanimous verdict the judge may recall the jurors after at least 2 hours having elapsed. The Juries Act 1974, section seventeen allows for majority verdict to be used, normally eleven to one, ten to two, ten to one or nine to one. In open court the foreman must state the number of jurors agreeing with the verdict and the numbers disagreeing with the verdict. Only 6 - 7 % of jury decisions are by majority verdict. Juries cannot fall below 9 in number. At each Crown Court, there is an official who is responsible for summoning enough jurors to try each case that will be heard in a 2-week period. If a trial may be exceptionally long, or difficult potential jurors are asked if they will be able to serve to complete the trial (e.g. as in the Soham case (2003)). The problem in civil cases, especially libel cases are that they can be very long. R v Wright in 1995 lasted 17 months. If the jury fails entirely to agree, a verdict is not entered at all and retrial is ordered (If 2 consecutive juries fail to agree, the defendant is discharged). If the jury decide upon a verdict of not guilty, the defendant is discharged. ...read more.

(especially in fraud cases with assessors who had expertise in accounts and business management) . In New Zealand, defendants can choose not to be tried by a jury, but instead by a judge sitting on his own. In N. Ireland trial is by a single judge due to special problems of threats and jury nobbling that existed between sectarian parties. In some countries, a panel of 3 or 5 judges sitting all together hears cases. This allows for a balance of views, instead of a verdict by a single person. There are not enough judges in our English system to implement this and it would be expensive. I think that trial by jury in the English Legal system is very effective, however suggestions for improvement could be a system that operates in Scotland. They have a 'judicial examination ', which covers continuous judicial control of pre-trial preparation compared with the English system, which emphasizes the trial as the critical period of determining guilt or innocence. The Runciman commission suggested that the Contempt of Court Act 1981 should be amended to allow research into the working of juries. On the other hand people may be less willing to serve on juries if they knew that their discussions could be made public. ?? ?? ?? ?? Sabrina 1 ...read more.