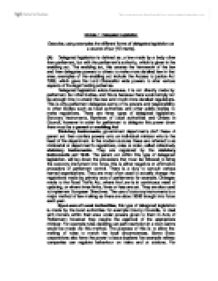 Describe, using examples the different forms of delegates legislation as a source of law

Module 1: Delegated Legislation Describe, using examples the different forms of delegates legislation as a source of law (15 marks). (A) Delegated legislation is defined as, a law made by a body other than parliament, but with the parliament's authority, which is given in the enabling act. The enabling act, this creates the framework of the law and then delegates powers to others to make more detailed law in that area, examples of the enabling act include the Access to justice Act 1999, which gave the Lord Chancellor wide powers to alter various aspects of the legal funding schemes. Delegated legislation exists because, it is not directly made by parliament, but other bodies, and this is because there would simply not be enough time to attend the new and much more detailed regulations. This is why parliament delegates some of its powers and responsibility to other bodies such as local authorities and other public bodies to make regulations. There are three types of delegated legislation; Statutory Instruments, Bye-laws of Local authorities and Orders in Council, however in order for parliament to delegate this power down there must be a parent or enabling Act Statutory Instruments, government departments draft these. A parent act then confers powers onto an individual minister who is the head of the department. ...read more.

The cabinet are all Privy Councillors. One common use of Orders in Council is to bring an act of part of an act into effect as most statutes do not become law on the day of the royal assent; instead they come into effect on the day appointed by the appropriate minister. Identify and explain the advantages and disadvantages of delegated legislation (15 marks) (B) There are many advantages of delegated legislation such as, Pressure upon Parliament, although the parliament has been known to create an act in 24 hours this is rare. As parliamentary procedures are cumbersome and complicated. Moreover Parliament does not sit for the whole year and there is often a great deal of pressure on the Parliament to fulfil a government's law making programme. Because of the limited time available, parliament could not enact all the detailed rules and regulations required in a modern society. The use of delegated legislation to deal with the details leaves Parliament free to concentrate on debating and deciding major policy issues for new bills whilst allowing the details of law reform to be filled in later. Technicality of subject matter, much of modern legislation is complex and technical. Using delegated legislation allows experts in the relevant field to become involved constructing more effective regulations. ...read more.

There is lack of effective supervision. Judicial review only occurs when an individual has the resources and determination to the challenge a particular law. It may be that many others have simply suffered in silence from the abuse of delegated powers. Also if a very wide discretion has been granted to the minister under an Enabling Act, the courts may be unable to challenge the laws created. Parliamentary controls have been seen as problematic. The commons select committee on Procedure in 2000 made a number of critisms in a report published in 2000. It said 'Statutory Instrument's' do not receive scrutiny in proportion to their merits. The current system works on the basis that 'Statutory Instrument's' with affirmative procedure are automatically more worthy of debate than those with negative procedure. In fact some negatives are concerned with important matters and some affirmatives are concerned with trivial and uncontroversial matters procedure. Hence the time and expertise of MPs is often wasted considering trivial affirmatives whilst significant changes to the law may pass through unchecked and undebated via the negative procedure. Another Disadvantage is that, Delegated Legislation shares with Acts of Parliament the same problem of obscure wording that can lead to difficulty in understanding the law. ?? ?? ?? ?? ...read more.