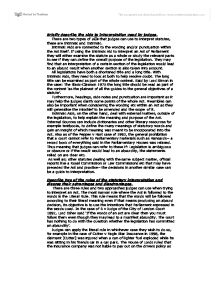 Describing the Rules and Aids to Statute interpretation. Including Advantages and Disadvantages.

Briefly describe the aids to interpretation used by judges. There are two types of aids that judges can use to interpret statutes, these are Intrinsic and Extrinsic. Intrinsic Aids are connected to the wording and/or punctuation within the Act itself. If using the Intrinsic Aid to interpret an Act of Parliament they will either examine the statute as a whole or study the relevant parts to see if they can define the overall purpose of the legislation. They may find that an interpretation of a certain section of the legislation would lead to an absurd result when another section is also taken into account. All legislations have both a shortened title and a long title. With Intrinsic Aids, they need to look at both to help resolve doubt. The long title can be examined as part of the whole context. Said by Lord Simon in the case: The Black-Clawson 1975 the long title should be read as part of the context 'as the plainest of all the guides to the general objectives of a statute'. ...read more.

In the case of R v Judge of the City of London Court 1892, Lord Esher said 'If the words of an act are clear then you must follow them even though they may lead to a manifest absurdity. The court has nothing to do with the question whether the legislation has committed an absurdity'. Judges can apply the literal rule in whichever case they wish to do so, for example in the case of Cutter v Eagle Star Insurance in 1998, the claimant [Cutter] was injured when a can of lighter fuel exploded while he was sitting in his friends car in a car park. The House of Lords ruled that the insurance company was not liable to pay out on the drivers policy as the Road Traffic Act 1988 states that they are insured for 'injury caused while on a road'. The House of Lords said that the car park was not a road as roads are for cars to move along it to a destination One of the disadvantages to this rule is quite obvious; it can produce absurd and rather harsh rulings and sometimes means that Parliament has to pass an amending Act. ...read more.

In the Adler v George case, the law said it was an offence to obstruct HM Forces 'in the vicinity of' a prohibited place. The defendants argued that they had actually been in the prohibited place and therefore not 'in the vicinity' of it thus meaning they were not liable. The court applied a second meaning under the Golden rule and stated that 'within the vicinity' meant near or actually in the place, finding them actually to have committed an offence. One advantage of this rule is that it allows harsh and absurd decisions to be avoided by some degree, meaning the rule is much more flexible and so the Act is interpreted in a way it was possibly meant to be read. It also allows judges to avoid objectionable and adverse decisions like in the Re Sigsworth case. Never the less there are also disadvantages to this rule. By using this rule it is clear that judges are 're-writing' statutes which only parliament is supposed to be able to do and is also disrespecting the words that Parliament have stated. ...read more.

Summary:A generally accurate account of aids to interpretation and two rules that help judges give a meaning to words in an Act. The explanation is well supported by case authorities.
Rating: ****