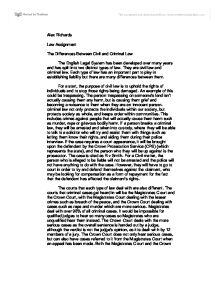 Alex Richards Law Assignment The Differences Between Civil and Criminal Law The English Legal System has been developed over many years and has split into two distinct types of law. They are civil law and criminal law. Each type of law has an important part to play in establishing liability but there are many differences between them. For a start, the purpose of civil law is to uphold the rights of individuals and to stop those rights being damaged. An example of this could be trespassing. The person trespassing on someone's land isn't actually causing them any harm, but is causing them grief and becoming a nuisance to them when they are an innocent person. criminal law not only protects the individuals within our society, but protects society as whole, and keeps order within communities. This includes crimes against people that will actually cause them harm such as murder, r**e or grievous bodily harm. If a person breaks a criminal law, they will be arrested and taken into custody, where they will be able to talk to a solicitor who will try and assist them with things such as letting them know their rights, and aiding them during their police interview. ...read more.

Both the Magistrates Court and the Crown Court are courts of 'first instance', and the verdicts made there have to be beyond a reasonable doubt (the decision has to be very obvious and not at all debatable). The verdict on a criminal case will be either guilty (convicted) or not guilty (acquitted). If found guilty, they will be sentenced. Sentences include being given community service, receiving an ASBO, being given a fine or, if it is a motoring offence, being given a driving ban. The Civil Courts are split into many different courts, known as the branches of civil courts. The County Court deals with less significant civil cases such as breach of contract and tort cases (negligence, nuisance, defamation and trespass). The County Court also deals with undefended divorce (where there is no objection from either party and they are both happy for the divorce to go ahead). There is a separate section of the County Court called the Small Claims Court that deals with any cases for under �5,000, and any cases between �5,000 and �15,000 are dealt with in the standard county court, and these cases are known as fast track cases. ...read more.

This deals with cases of disputed wills where people are arguing over what they should rightly receive from a deceased person's will. It also deals with cases of bankruptcy, company law disputes, tax cases and copyright infringements. Another civil court is the Court Of Appeal (Civil Division). This hears appeals from the county court and the high court and the cases are heard by Lords Justices of Appeal. In civil law, in order to be able to prove the case, the decision is based on a balance of probabilities. For example, as soon as you are more than 50% sure someone should be liable, then you can have them lose their case. The decisions in civil cases are not called "guilty" or "not guilty" like in criminal cases, but are called liable (the equivalent of guilty) and not liable (the equivalent of not guilty). If found liable in a civil court then you may be ordered to pay damages to the claimant, or may be found to have broken your contract, known as specific performance, which is where a contract has been broken and monetary value cannot replace damage that has been done because of the contract being broken. ...read more.