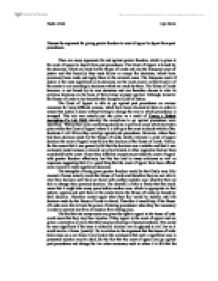 Discuss the argument for giving greater freedom to court of appeal to depart from past precedence.

face injustice if they appeal to the court of appeal and are given a conviction or claim that they must pay because of past precedence. This could be more significant if the issue is related to criminal law as opposed to civil law as it could lead to a firmer 'penalty'. So in relation to the argument that the house of lords hears cases on a rare basis it may lead to the conclusion that until a significant case is presented injustice may be done. So the fact that the court of appeal can go against past precedence and change the law when necessary such as where it is felt that the previous decision was a mistake or carelessly made because an act of court or regulations had not been considered properly for example. Nadia Ullah Lyn Davis ...read more.