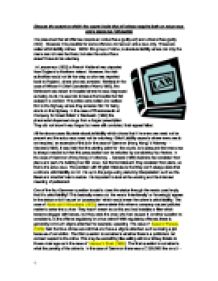 Discuss the extent to which the courts insist that all crimes require both an actus reus and a mens rea ( 25 marks) It is presumed that all offences require an Actus Reus (guilty act) and a Mens Rea (guilty mind). However, it is possible for some offences to have an actus reus only. These are called strict liability crimes. Within this group of crime, is absolute liability where not only the mens rea not need be there, but also the actus Reus doesn't have to be voluntary. In Larsonneur (1933) a French National was deported from England to Northern Ireland. However, the Irish authorities would not let her stay so she was reported back to England, where she was arrested. Similarly in the case of Winzar V Chief Constable of Kent (1983), the Defendant was taken to hospital where he was diagnosed as being drunk, he was told to leave the hospital but fell asleep in a corridor. The police were called and walked him to the highway where they arrested him for being drunk on the highway. In the case of Pharmaceutical Company for Great Britain V Starkwain (1986) the pharmacist dispensed drugs from a forged prescription. ...read more.

One of the four Gammon question to ask is: does the statue through the words used imply that it is strict liability? This basically means do the words 'intentionally' or 'knowingly' appear in the statue or is it 'cause' or 'possession' which would mean the crime is strict liability. The case of Alpha cell V Woodward (1972) demonstrate this where a company caused polluted matter to enter into a river. They hadn't meant to do this and had installed a filter which became clogged with leaves, but they were the ones who had caused it. Another question to consider is, is the offence regulatory or a true crime? With regulatory offences there is generally not much stigma attached for example, speeding. The case of Sweet V Parsley (1970) held that true crimes are criminal and have a stigma attached such as losing a job because of conviction. The third question to consider is whether there is a public/social concern aspect to the crime. This may be something like selling alchol or lottery tickets to those under age as in the case of Harrow V Shah (1999). ...read more.

There are various advantage and disadvantages to strict liability. An advantage is that it promotes care and attention but conversely some are convicted even when they have taken all reasonable steps to avoid committing an offence. A larger company continues to pay small fines as they have little impact, whereas small companies can be affected both by the fine and damage to their reputation. Once someone realises there is defence and courts start imposing larger fines, behaviour will change. A good example of this is wearing seatbelts in cars. Some years ago, lots of people would just not wear a seatbelt but since the law changed and there are lots of fine, most now wear one. Due to judges making the law this can result to undue rulings. This was seen in Lim Chin Aik V Regina (1963) and Smedley V Breed (1974). Therefore, it is important to have a consistent approach when it comes to judges determine if a crime requires mens rea or not. Absolute liability crimes seem the most unfair but with strict liability, because it is up to judges, they can also be inconsistent and unfair. Remember to write about reforms 2 ...read more.